The Haldane school district named Julia Sniffen — formerly the middle school principal — as its new high school principal. She succeeds Peter Carucci, who resigned unexpectedly on March 31 after nine months on the job, citing the need to “support the health and needs of my family.”

At a May 2 meeting of the district’s Community Leaders Group, an informal advisory panel, Superintendent Diana Bowers said the search committee realized that, with Sniffen, “we had the perfect candidate already here.” School board President Jen Daly said that “she’s going to do a fantastic job.” 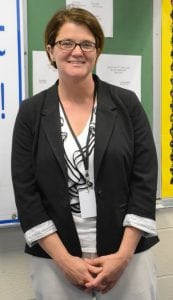 After serving in an interim capacity, Julia Sniffen takes over as Haldane High School principal on July 1. (Photo by L.S. Armstrong)

Sniffen joined Haldane as an elementary school teacher in 1998 and was named principal of the middle school in 2015. Currently the acting high school principal, she will take over on July 1. She said she looked forward to working with parents, administrators and everyone involved with Haldane, “but above all, with the kids. I’m committed to this community. I’m excited.”

The district’s search now has shifted to filling Sniffen’s position.

Bowers on May 2 also discussed infrastructure projects that could appear on a ballot as early as next year.

The first proposal, with a price tag of $4 million to $5 million, would include replacing or upgrading elementary school windows, improvements to the bathrooms, exterior door changes, additional parking, a new heating system in the main building, electrical capacity upgrades, new ventilators and the replacement of asphalt.

A second proposal calls for spending $3 million to $4 million for an addition to the high school that would function as a food service area or cafeteria as well as a multi-purpose space for classes and activities such as theater, yoga or media screenings. District officials believe state aid would cover about 35 percent of the costs.

Bowers said the proposals are preliminary, although the new heating system “is one of the things that just has to be done.”

She noted the high school lacks a gym, cafeteria, art and music rooms and other typical facilities. “Can we exist that way? Yes,” Bowers said. “But it’s not a proper high school.”

Daly said residents and district officials “as a community have to decide what are our priorities.” 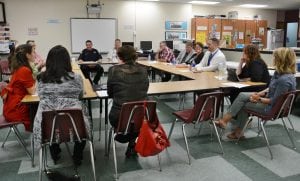 The Haldane Community Leaders Group, which offers informal advice, convene on May 2 to discuss the pending budget and other proposals. (Photo by L.S. Armstrong)

Voters also will be asked on May 16 to consider spending $110,000 for a school bus and $40,000 on maintenance equipment, which will not require payments until the 2018-19 school year, and $100,000 to take from a reserve account for gym and library renovations. “We’re not asking voters for money,” only for permission to spend funds from the reserves, Bowers said regarding the gym and library plans.

The budget was approved by the school board at an April 18 workshop after being revised to account for a $110,625 deficit. Notable changes included the reduction of sixth-period assignments ($12,125 in savings) and the decrease in spending on new furniture ($37,500 in savings, although each building still requires $2,500 for replacement items).