On Thursday, April 27, the Haldane High School 400-meter girls’ team — Abbey Stowell, Ashley Haines, Jamie Calimano and Heather Winne — competed in the 123rd annual Penn Relays in Philadelphia, finishing their heat in 4:25.14. It was just one of more than 70 races that day at the event, which takes place at the University of Pennsylvania over three days and features hundreds of high school, college and Olympic athletes. 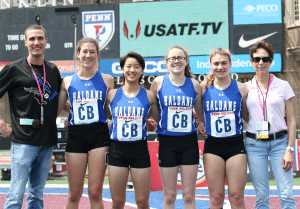 After the races on Friday, the Penn Relays held a dinner to enshrine some top performers into its “Wall of Fame,” including the Villanova women’s team that won the 1984 distance-medley relay. The Wildcats were anchored by a freshman, Lauren Searby of Oyster Bay — now known as Lauren Haines of Cold Spring, and as the mother of Ashley Haines, who anchors the Blue Devils team. 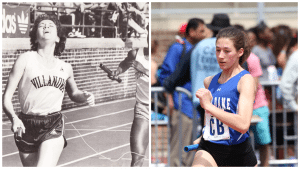 “It was a warm day [80 degrees], and we had a slight lead, a few yards” when the baton came to her, recalls Haines, who is an assistant coach on the Haldane track team. “I knew I was up against Joetta Clark from Tennessee, a senior who was really fast. Going out, after my first quarter [as anchor, she ran four laps], the coach yelled out, ‘52 seconds!’ which was a quick pace.

“I knew Joetta was close behind me; I saw her shadow and I could hear her breathing,” Haines says. “I was told that she tried to pass me three times. In the last 200 meters, I switched gears. I didn’t realize what happened, I just remember my teammates coming over and celebrating.”

What is a “distance medley”?

Villanova finished in 10:53.27, carving 15 seconds off the world outdoor record. (Three decades later, the record stands at 10:36.50.) Joetta Clark went on to run in four Olympics. Haines in 1984 was named both an indoor (1,500 meters) and outdoor (3,000 meters) All-American. She finished her collegiate career as a seven-time Big East champion.

Because the 4×800 race at the Penn Relays on April 29 was run in honor of the 1984 Villanova team, Haines was asked to present the traditional gold watch to the first-place finishers, which happened to be Villanova. The day before, the Wildcat women’s distance-medley team also won. “That was our team 33 years ago,” she says. “The energy was incredible with 55,000 people there.” 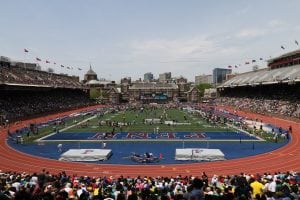 Franklin Field at the University of Pennsylvania in Philadelphia, site of the annual Penn Relays (Photo by Michael Haines)

In high school, Haines was the only girl on her track team and she had not run in a relay until she arrived at Villanova. As a Haldane coach, she says she enjoys “motivating and inspiring” the athletes. “I know what they are going through, and they know I relate,” she says. Her daughter, who turned 16 on the day of the Penn Relay race, asks for advice, “but I try not to be overbearing,” she says. “It’s a fine line as coach and mom.” She does concede that it brings pride “to see how beautiful her stride is.”

Haines sees running as a reflection of life. “It mirrors the highs and lows,” she says. “Track is the ultimate training tool for other sports and for life.”