Neil Maher, a professor who teaches environmental and political history, will speak at 7 p.m. on Thursday, May 11, on “Nature’s New Deal: The Great Depression and Franklin Roosevelt in New York’s Hudson Valley” as part of the Beacon Sloop Club lecture series. 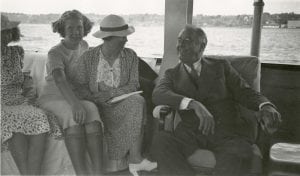 Franklin D. Roosevelt in 1937 aboard the U.S.S. Potomac on the Hudson River near Hyde Park (FDR Library)

The free event, which takes place in the sloop clubhouse next to the train station, will address how Roosevelt’s experiences growing up on the banks of the river influenced his approach to the New Deal and the Civilian Conservation Corps. See beaconsloopclub.org. The lecture was rescheduled from February.