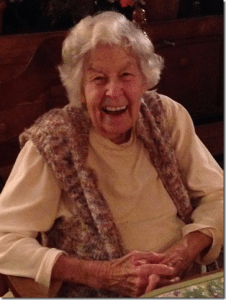 Sue’s stories of her experiences over the last nearly 100 years illustrate the cultural, social, economic, and political transformations that changed and shaped the world as we know it today. Growing up the only daughter with an older and younger brother, she was called upon to assume many of her family’s responsibilities when her mother died when Sue was 14 years old. Such loss, compounded by the height of the Great Depression, urged her to realize her steadfast resourcefulness and ability for getting things done, and done well.

Her father owned and managed a local printing company and owned one of the first automobiles in the area. For several years, he drove his family from Connecticut to Mount Dora, Florida, for extended visits. The trips included tending to orange groves that he later lost during the financial crash of 1929.

Also during World War II, when Sue maintained regular correspondence with her younger brother and many male friends who were based primarily in the European theatre across all branches of the U.S. Armed Forces, she served as a civilian airplane spotter with the Army Air Forces Ground Observer Corps from defense posts along the Connecticut coast. She later described accounts of covering her family’s windows to protect against enemy attack.

Sue was an active member of the Philipstown Garden Club for many years and immensely enjoyed cultivating her own gardens — a plethora of flowers and vegetables alike. Her contributions to conserving and beautifying such historical treasures as Constitution Island and Boscobel House and Gardens exemplified her dedication to land stewardship. She found much solitude and inspiration while working in her garden, often referring to it as her place of worship.

For the past 12 years, she served on the board of directors for N. Dain’s Sons Co. Founded by Nathaniel Dain in 1848, it is Peekskill’s oldest business and one of the oldest family-owned retail lumber businesses in the country. Sue provided wise counsel in support of the ongoing growth and sustainability of Dain’s Lumber, pointedly commending her son Jeff’s extraordinary management and leadership abilities which carried the business through extremely challenging times. As Sue would remind Jeff, “The company made it through the Depression; we will make it through this.” Today, the company is thriving.

Locally respected and known for her expertise in and outside the home, Sue skillfully designed and maintained her family’s home and surrounding property with commitment to responsible land stewardship and wildlife preservation. Examples included her composting and responsible burn practice, rotational vegetable gardening, and focus on propagation of native species.

Likewise, indoors, Sue enthusiastically applied her astute organizational and management acumen to creating a home filled with continuous learning and achievement. She extended her values and expectations to her children, dedicated to teaching them how to live self-sufficiently with accountability, integrity and purpose. Her 1950s architectural plans for their home proved essential in her later years as she easily moved from one end of the house to the other on one floor. Her value for long-term wellness was expressed in the nutritional garden-grown meals she fed her family and with the care she took to adhere to a healthy diet.

Her children learned much from their mother’s culinary prowess, concentrating on simple preparations with fresh ingredients. In addition, Sue sewed many of the children’s clothes (and taught them how to do the same), crafted all the drapes and slipcovers and hung wallpaper throughout their home, laid the flagstone that still lines their backyard pool, created memorable quilts for family members, and always offered options for conserving and repurposing items for added use.

Sue appreciated her many friends and contributed to the Garrison community, having great times at the Highlands Country Club and informal gatherings held at their own and friends’ homes. Admired for her compassion and strength, a good friend recently described how Sue has an “exceptional way of being sympathetic and supportive without the sentimentality or judgment. Her directness and reality-clear thinking combined with good spirit is magical.”

Of national import, Sue ardently worked with her husband Tip and several other committed Garrison residents as catalysts in launching what later became the focus of a large environmental movement galvanized by citizen involvement. Through their founding of the Philipstown Citizen’s Association in early 1964, Sue and Tip and others led the successful opposition to the Con Ed application to the Federal Power Commission for a pumped storage power plant on Storm King Mountain and overhead power lines right through Philipstown and the Hudson Valley. Their testimony during hearings in Washington, D.C. underscored the emerging awakening of awareness and action for people’s role in how land is used and the impact on its scenic beauty.

Services were private. The Dain family expresses its appreciation to Dr. Cynthia Ligenza, Visiting Nurse Services in Westchester, Comfort Keepers of Peekskill and Hospice Care in Westchester and Putnam. Memorial donations may be made to the National Audubon Society or the American Society for the Prevention of Cruelty to Animals.