Garrison family lives together in one room

The emergency decluttering that occurs when unexpected visitors arrive and stuff is thrown into the spare room — that doesn’t happen at the Garrison home of Takaaki and Christina Kawabata. There is no spare room.

In fact, there is only one room of living space in their 1,200-square-foot home, which is shared by the couple and their two children, Tozai, 9, and Akari, 6, both students at the Garrison School. The family sleeps, cooks, works, exercises and plays in a state of semi-togetherness. There’s a bit of attic and an unfinished basement, both of which are for storage, not escape. The home was originally a log cabin, gutted and reimagined by Takaaki, who is an architect, and Christina, an interior designer. 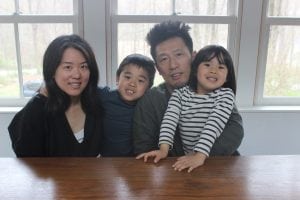 Christina, Tozai, Takaaki and Akari Kawabata at their Garrison home (Photo by A. Rooney)

Although the furnishings are minimal, it would be a mistake to call their existence spartan, which was the veiled criticism in an article about the home, “The Anti-McMansion,” that appeared three years ago in The New York Times. Along with a description of its aesthetics and construction, the reporter included an aside about the children playing with only one toy at a time, exchanging each for another in a large basket. It’s easy to imagine many readers, while admiring the home, also muttering, “Let’s see how long that lasts.”

It has lasted. Tozai and Akari’s space is partitioned by a frame hung with nylon beads. They can make as much mess as they like there, as long as it’s cleaned up before bedtime, when they roll out their futons. (Their parents sleep on a futon in a loft.)

The family owns computers but no TV. The children “make their own games and create their own adventures,” says their father. “They use the resources of nature.” 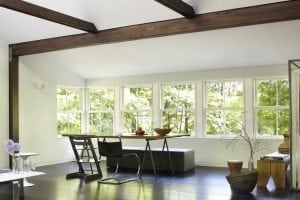 The home’s shelves are filled with books and decorative objects, many acquired during their travels. Guitars lean on the walls and, more unusual, a dress form sits near a punching bag, an aesthetic curiosity. The space is clean but not untouchable, a mix of serenity and kid energy.

“Some people read The New York Times article and thought we were monks,” Christina says. “But our dream home wasn’t 5,000 square feet with many bedrooms. Obviously our kids are young and at some point we will have to separate them more. But for now there are so many benefits.” 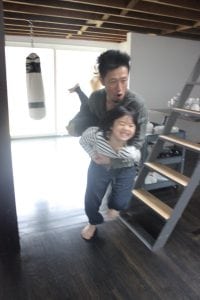 Though the house radiates a serene atmosphere, there is plenty of action (Photo by A. Rooney)

“This isn’t a social experiment,” insists her husband. “It’s similar to how I grew up in Japan, where three generations all lived in one room — the room that was heated.”

The flight from a farm house on an island in rural Japan to New York City was propelled by Takaaki’s study of architecture. His father and grandfather were also architects. He left for the U.S. in 1990, after apprenticing under his father (who did the same under his father), to study design at the Fashion Institute of Technology. 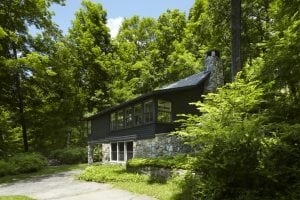 Mentored by the “right people at the right time,” he worked for several firms, each “with its own very distinctive point of view,” he says. “From there you develop your own style.”

Christina’s parents are Korean, but her father’s business took the family all over Southeast Asia. Eventually they settled in Tokyo, where she attended a school with students from more than 50 countries.

“Being exposed to that environment cemented the idea that you become a citizen of the world,” she says. “It was a natural progression for me to come to New York.” 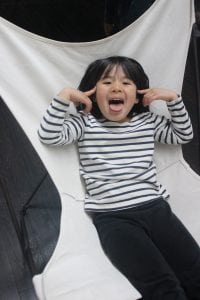 Over the course of an hour or so, Akari mixed up quiet, self-directed pretend play with running outside to collect flowers and, finally, some making-faces moments. (Photo by A. Rooney)

She studied archaeology at New York University but felt distracted. “I was always interested in architecture and design but had the typical Asian parents who were focused on law or medicine,” she says. She left NYU, worked for two years, then enrolled at F.I.T. to study interior design. The couple met through a mutual friend.

Christina says the couple received a lot of feedback from The New York Times article, and not just about the home. “People could relate to us — or not,” she says with a laugh. One friend who housesat pranked them with an altered photo that showed a flat-screen television hanging over their fireplace, accompanied by a thank-you note that read, “Here’s a gift for you.” 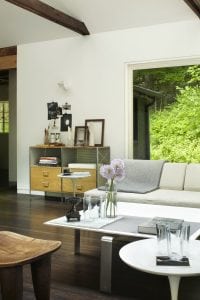 The article’s greatest effect was on their business, resulting in what Takaaki recalls as “a tsunami of phone calls. People were intrigued not just by the design, but by the way we lived.” It had global reach; the couple just finished commissions in Tokyo and Manila.

The Kawabatas are quick to point out that home ownership is the same for them as for anyone. “There are leaks, lots of maintenance, all of that,” says Takaaki. “Just like other families, we’d like to expand it while keeping the essence. We just don’t want to create doors and walls.” His wife interjects: “I’d like a tub.”

One thought on “The House with No Walls”