When John Canevari talks olive oil, he sounds a little like he’s discussing wine, with references to complexity, vintages and crops. Indeed, Canevari, co-owner of the new Cold Spring shop, The Blue Olive — an offshoot of the Pawling shop of the same name — offers comparisons between olive oils standing with the American palate and wine’s place in the 1970s.

“We’re not an olive oil nation,” he says. “We’re a butter nation. But things are changing. Back in the ’70s olive oil was considered unhealthy. But then the ‘Mediterranean diet’ came in. Sicilians and Greeks live longer. There have been so many studies proving the health benefits.” 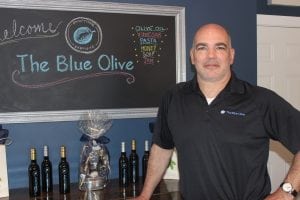 John Canevari, co-owner and proprietor of The Blue Olive (Photo by A. Rooney)

Inside The Blue Olive, located at 125 Main St., a tabletop on three barrels creates an island for all varieties of oil and many infusions: tarragon, green chile, garlic, blood orange, harissa, wild mushroom and sage, Tuscan herb.

Each is described on an adjacent label that details not just the flavor and strength but the chemical breakdown, with properties like polyphenol and oleic acid levels. Taste panel assessments indicate fruitiness, bitterness and pungency. Sampling cups are located near each bottle.

Along the walls are vinegars, light and dark, balsamic and beyond, straight or infused, plus other oils such as walnut and sesame. There’s Red Hook honey and Pleasant Valley sunflower oil, tapenades, jams, pestos, pasta and olive oil soaps made by a Canevari daughter. These are soon to be joined by ceramics made by John Canevari, the better to pour your oils from. 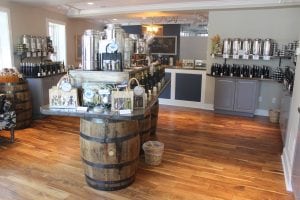 Three barrels support a tabletop of olive oils (Photo by A. Rooney)

Canevari and three partners — his wife, Beth, and their friends John and Laura Leahy, opened The Blue Olive in Pawling in 2014. Although he had no background in either retail or the food industry beyond an older brother who is a Culinary Institute graduate, John Canevari had been mulling ideas for a few years after a visit to an olive oil shop in California. He also grew up in a “household informed by Italian cooking,” he says, and earlier started a vineyard in Rhinebeck with a friend.

The name Blue Olive was inspired by a restaurant in Beth’s native Portsmouth, New Hampshire, called Blue Strawberry. (That another Cold Spring business called Pink Olive opened a few weeks earlier on Main Street is coincidence. Both were named years before, in other locations.)

The Canevaris and Leahys met at church and found they had much in common, including large families (four children for the Canevaris, five for the Leahys). Their roles have skewed to their strengths: John Canevari who spent a career in advertising, handles most of the marketing. With certification as an olive oil sommelier from the International Culinary Center in New York in hand, he also organizes workshops, tastings and events. 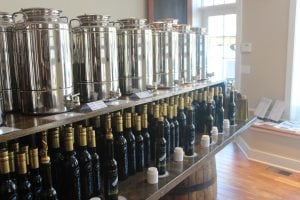 Tasting cups allow customers to sample (Photo by A. Rooney)

John Leahy is the chief financial officer and Beth Canevari and Laura Leahy run day-to-day operations at the two locations. “I don’t think any of us could have done this solo,” John Canevari says.

The Blue Olive partners purchase oils and vinegars in bulk from a company in Oakland, California, and infuse the flavors themselves. The Oakland company imports during half of the year from Chile, Argentina, Peru, Uruguay and Australia, and during the other half from the Mediterranean basin, particularly Spain and Portugal.

“Our California partner has their own mills, and exclusive sources for the oils,” Canevari explains. He notes that many supermarket oils are mislabeled as “extra virgin,” as are some bulk oils. The Oakland company tests its oils to determine how they should be identified, he says.

The partners planned to open their second store in Millerton but shifted to Cold Spring in part because of the availability of 121 Main and its large windows. “The village is so quaint and beautiful, and people have been so welcoming,” Canevari says.