Philip Schatzle, 82, of Cold Spring was inducted on May 16 into the New York State Senate’s Veterans Hall of Fame. He was nominated for the honor by Sue Serino, who represents Cold Spring in the State Senate. 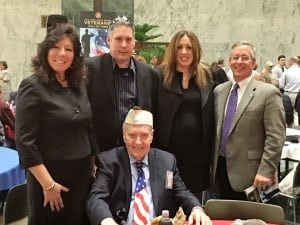 Born and raised in Cold Spring as the middle of five sons, Schatzle joined the U.S. Army in 1956 at age 22. A sergeant, he served in Germany during the Korean War at the same camp as Elvis Presley.

After leaving the service, Schatzle taught science at Briarcliff High School for more than 30 years. He is a longtime member and former commander in the American Legion and VFW in Cold Spring and coordinated Memorial Day parades and the placement of more than 1,000 flags on gravesites of veterans.