Defeated 9-4 by Hastings in Section 1 match-up

The Haldane boys’ lacrosse season ended on May 17 with a 9-4 defeat at Hastings, which will advance in the Section 1, Class D tournament to play top-seeded Bronxville. The Blue Devils were seeded No. 9 and Hastings No. 8.

It looked like trouble early when the Blue Devils broke out the black jerseys on the hottest day of the year so far. It was 92 degrees at game time and though it had a deeper roster than the Yellow Jackets, Haldane seemed to wilt in the heat.

Coach Ed Crowe said he would take the blame for the uniforms. “We were 1-0 on grass wearing black,” he explained. 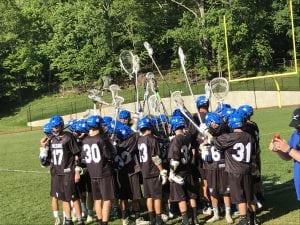 The Haldane lacrosse team huddles during its May 17 game against Hastings. (Photo by L.A. Klein)

Haldane goalie John Hankel saw a lot of action early as the majority of the first period was played on the Blue Devils’ side. Hastings junior Orin Jason often had the ball and took six of Hastings’ nine shots; Haldane managed two. But neither team scored.

During the break, Crowe gathered his players in the shade and implored them “to push in transition.”

Brandon Twoguns scored first in the second period to put Haldane up 1-0, but in the ensuing face-off, Hastings’ Frank Carozza won the face-off, ran down the middle of the field and scored. The Yellow Jackets fired off four more goals in the period, two within a minute, putting Haldane in a 5-1 hole.

At half, the coaches tried to motivate their team. “Do you want to go out without a fight?” Crowe said. “They are more tired than you are.”

In the third, after an Orin Jason miss, Blaine Fitzgerald went the length of the field, withstood a slash and powered through to the front of the net. The deficit was now 5-2. Eighteen seconds later, Twoguns bounced in a goal, making it 5-3. 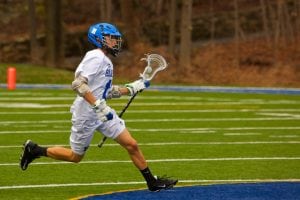 Brandon Twoguns, who scored three goals against Hastings, in a game earlier this year (File photo by Ross Corsair)

But Haldane’s momentum was short-lived. Hastings scored two goals in 40 seconds, extending its lead to 7-3.

“We played tough,” said Crowe. “This is a hard-working group. We just had a tough time finding the back of the net.  Too many dropped passes, and they capitalized.”

He noted that the Blue Devils, who won only two games last year but six this season, will have 19 players returning. “I like the direction the program is headed,” he said.