Bob Bickford has done so much volunteer work in Cold Spring and Garrison over the past quarter-century that when he decided to slow down, it is viewed as a “retirement.”

On Sunday, May 21, Bickford will be honored by the Philipstown Depot Theatre at its Spring Benefit for his 19 years on its board. The event takes place at Riverfront Park on Garrison’s Landing from 5 to 7 p.m.

The Garrison resident has served on nearly a dozen nonprofit boards since he and his wife, Wendy, moved to Philipstown in the early 1990s. But after stepping down this year from the boards of the theater and Friends of Fahnestock and Hudson Highlands State Parks, he will remain on just one: the MeKeel’s Corners Chapel Association, which maintains the small church at the intersection of Route 9 and Route 301. 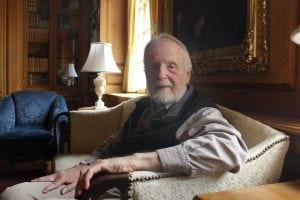 Bob Bickford (Photo by A. Rooney)

“It’s just me and Eddie Cleary now,” Bickford says. “But we’re gearing up for the Fourth of July celebration. We sing patriotic songs — it’s fun!”

After moving to Philipstown, Bickford got his feet wet as a volunteer by joining the St. Philip’s Church choir. “I knew two people already — Holly Evarts and Doug Banker — and then ran into a real powerhouse, Nan Gordon,” he recalls. “She told me — well, I suppose she asked me — to join the vestry of the church and the board of the Putnam County Historical Society [now called the Putnam History Museum]. I became treasurer of both organizations, and eventually I became president of the historical society.”

Bickford says his particular value on a board is that, as a lawyer, he is familiar with the tax filings required of nonprofits. (Among other stops in a long career after graduating from Harvard in 1956 and Harvard Law in 1960, he was associate general counsel at Kidder Peabody, counsel to the Vincent Astor Foundation and assistant corporation counsel for the City of New York’s Economic Development Division.) 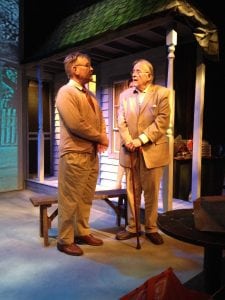 Bob Bickford, right, with Steve Andreson in the Depot Theatre production of To Kill A Mockingbird (Photo courtesy of Amy Dul)

“Bob’s a legal eagle,” says Claudio Marzollo, who also serves on the Depot board. “At the time we proposed turning the depot into a theater, neither the Philipstown Recreation Department nor the Town Board knew anything about running a theater. Bob helped set up the 501(c)3” in 1996 that allowed it to operate as a nonprofit.

Marzollo also praises Bickford’s deft negotiation skills. “The only difficulty is that because Bob has been on so many boards, sometimes one board makes him stay out of a discussion about the other!” he says. “But he’s always been the calm, intelligent voice; the wise counsel; he’s been tremendously helpful.”

Bickford says that in his experience a well-functioning nonprofit board has “a good mission.” He noted the challenge of recruiting board members. If a potential candidate is working, he says, you only usually have him or her on the weekends. And if they’re retired, “everyone wants them.” In addition, fundraising has never been easy for him. “It’s a task I don’t have a great deal of talent for; some do,” he says. “It is a problem locally as there are only so many pockets. The same group of people support all the local organizations — if there’s a party, the same people come.”

Among his many volunteer positions, Bickford says working for the Depot Theatre has been particularly memorable. “It’s my favorite because it always has such interesting things going on,” he says. “Every year it’s a different season, different productions, different problems, and the board meetings are fun and substantive.”

Bickford has had other roles at the theater — the kind with entrances and lines. Although a member of Hasty Pudding Theatricals at Harvard, Bickford didn’t appear on stage again until his involvement with the Depot.

“I always fancied myself an actor,” he admits, “but I didn’t do anything until I became involved with the Philipstown Players [a group that performed at the Depot]. Marilyn Heberling was the first director I worked with and we did a couple of Ionesco’s and [Tom Stoppard’s] The Real Inspector Hound. You get bitten. I always re-upped.”

Bickford’s more recent appearances include To Kill a Mockingbird (as a lawyer) and 1776 (as a statesman).

Tickets for the Depot benefit, which start at $125 each, are available at brownpapertickets.com. The event is preceded by a 2 p.m. performance of Anne of Green Gables.

One thought on “A Seat at Every Table”