Did you get a call from “Larry Burke”? Click here.

NYPD veteran says he likes to walk the beat

In April, the Cold Spring Board of Trustees appointed Larry Burke as officer-in-charge of the village police department, succeeding George Kane. Burke, 51, who lives in North Highlands with his wife, joined the force in 2014 and now oversees 12 officers (all village officers, including Burke, are part-time). We spoke with him at the Cold Spring Police Department office on Main Street. His responses have been edited for brevity. 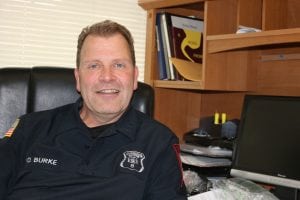 Where did you grow up?
In Inwood, on the northern tip of Manhattan, just north of the Bronx and south of Marble Hill.

As a youngster, what did you dream of becoming?
I didn’t know what I wanted to do. I had always seen the officer walking around our neighborhood, keeping us in line when we needed it. He knew our parents and everyone in the neighborhood. I thought it would be a great job. You could take the police test when you were 16-and-a-half years of age. They called me when I was 18 and did a background investigation, although I couldn’t go into the academy until I was 20.

Is “cop” still considered a derogatory term?
Not for me, although “police officer” is more professional. Back in the day in the neighborhood, it was always, “The cop’s on the block … The cop this, the cop that ….”

When did you join the police force?
I went to the New York City Police Academy in 1987. You were assigned to housing, transit or regular NYPD. I was assigned to transit and attended that academy and worked in the subway system until I joined the regular NYPD in 1992.

What was it like being a police officer in New York?
When you’re a rookie they put you in the high-crime areas, which for me was the 40th precinct in the South Bronx. You ran from job to job answering 911 calls. After that I got into community policing, which I loved. My patrol was 149th Street and Cortland Avenue to 151st Street. You went out every day, walked the beat, went into stores and talked to people. You wound up being part of the neighborhood.

Do you approach the job differently in a village?
It’s still community policing. I like to walk up and down, go into stores, meet the people. That’s how you get a feel for the place. People see you and after a while they get comfortable with you. You learn things that way.

Most people want to put their mark on an organization when they are put in charge. What will your mark be?
I’m not looking to put a stamp on anything. My reputation speaks for itself. If people think of me as someone who came here, loved the community and gave back, that’s all I’m looking to do.

In the past, there have been break-ins at businesses. Can policing prevent that?
You can make suggestions to store owners. When you check stores, you see some of the back doors are not locked. If someone has a drug problem, it’s easy to grab something to sell. I have worked midnights the last couple of months; I make sure doors are locked. I watch for people on the street whom I don’t recognize. It’s about more presence, patrolling so that everyone sees we’re out there.

What are your thoughts on the opioid problem?
I was in the NYPD narcotics division for 14 years before I retired. I did “buy and busts,” search warrants and case work on gangs. To me, in a small village, it’s more of a community thing, parents taking better interest in their kids. It’s difficult. You want your kids to have their privacy, I get that. But realistically at a certain age — and it’s getting younger, between 12 and 16 — it’s paramount to talk to your kids. There’s always peer pressure. Sometimes mom and dad have to go through a kid’s room to head off things.

When I’ve talked to parents who have lost a child to an overdose they have sometimes said they gave him or her their space when maybe they should have taken more action. For us it’s about presence on the street. If parents come talk to me or one of my officers — that would be best.

Are you involved in the community outside the CSPD?
I’m a firefighter with the North Highlands Fire Department and president of the firehouse. I’m also a member of the Knights of Columbus.

What do you do to relax when you’re not on the job?
I used to like riding my Harley, but I sold it. It’s just being at home with my wife and having some down time. And we like to get away. The last few years we’ve traveled to Italy, Spain, Portugal, France, Croatia and Greece.

What do you like most about being a police officer?
I love the whole thing — the good, the bad and the ugly. It’s like being a referee in a hockey game. The home team likes you one day and the next day you have to call a penalty and then you’re in trouble.

What part of the job do you dread?
Getting to the scene of an overdose or a suicide, the hardcore stuff. It’s not just about the person who passed away; you’re trying to comfort the family. They have questions. Why did it happen? How could they have prevented it? That’s the hard part.