At the May 9 meeting of the Village Board, Cold Spring Police Department Officer-in-Charge Larry Burke praised Officer Terry Comiskey for his work on the April 29 midnight shift. Comiskey responded to a 911 hang-up, found a person who had stopped breathing and administered CPR until an ambulance arrived. 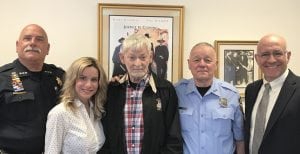 On March 20, employees at the Putnam County Office Building in Carmel saved the life of Robert Odell, 71, of Cold Spring, after he collapsed in a hallway on the first floor. Special Victims Investigator Jaemie Caban, who works in the District Attorney’s office and is trained in CPR, began chest compressions after finding Odell had no pulse. Putnam County sheriff’s deputies got Odell’s heart beating with a defibrillator on the third attempt.