When a genealogist fails to uncover an ancestor in one town, he or she must expand the search, mindful of the political or historical forces that may have moved someone to a neighboring area.

Putnam County provides a good example. Until 1812 it was part of Dutchess County. In 1697, all of what is now Putnam (except for a strip along the Connecticut border known as the Oblong) was granted to Adolphus Philipse. The family controlled this region until after the Revolutionary War. In 1806 a corner of Philipstown was annexed by Fishkill, placing some Putnam records in Dutchess County before and after the counties divided.

At the same time, land-hungry Connecticut residents migrated west into the county, while others migrated north through the Oblong, stopping in Putnam. Relationships with churches in Westchester County were common, as well. As a result, many of the records you’re after may be in places you don’t expect.

For Putnam, the County Historian Archives in Brewster is the best starting point. Call for an appointment (845-808-1420), followed by an email to [email protected] with details of your search. (The office is open from 10 a.m. to 2 p.m. Monday through Wednesday.) I was recently there looking into the family of Dr. William Clark, who lived in Ulster County from 1800 to 1818. His wife, Mary Myrrick (1777-1851), was the daughter of Joshua Myrrick, who lived in Putnam County prior to the war.

Upon arriving at the historian’s office, I was presented with the Myrrick family folder and another with “certificates of competence to practice medicine, 1797-1843.” I was not aware of this resource. We found no William Clark but there was a certificate for Theodorus Clark dated May 1, 1832. A Theodorus/Dorus Clark appears in Families of Early Hartford, Connecticut, as do the earlier marriages of a William Clark and a Dr. Nehemiah Clark, appearing to be in the right generations for perhaps a grandfather and great-grandfather of our Dr. Clark. 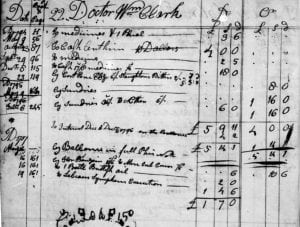 An entry for Dr. William Clark in a ledger kept by Dr. Elias Cornelius

Was Theodorus a brother or cousin? Next stop: The Connecticut State Library in Hartford, just under a two-hour drive from the Highlands.

Having studied the area, I knew of another primary source, the ledger of Dr. Elias Cornelius, who practiced in Yorktown and Somers, both towns near Carmel, where Joshua Myrrick is buried. An abstract of its entries includes many mentions of Joshua, as well as one for Dr. William Clark and one for Widow Clark, in a 1797 claim against her estate by Peter Badeau Sr.

A further clue: a 1785 will filed in New York County and proved in Dutchess for Abigail Clark of Frederick’s Burgh. It mentions a grown son, William, executors Elias Cornelius and Isaac Seacor; witnesses were Peter “Beadean” Sr. and Isaac “Badean.” No doubt this was Peter and Isaac Badeau, whose names are found throughout the Cornelius ledger.

So what’s missing? While “Widow Clark” was almost certainly Abigail Clark, above, and she had a son, William, we still lack ironclad evidence that she was the mother of the William Clark who married Mary Myrrick. Although, with all the other relevant names in proximity, the relationship seems likely.

Hoping to find more references, I went to the source. The Cornelius ledger is on microfilm at the New York Public Library. Unfortunately, it does not provide any information about when Dr. William Clark’s children were born. I was hopeful because most of the abstracts noted that a wife or child had been the patient, and sometimes named them. But William Clark’s entries were skimpy. He probably took care of his own family without the help of another doctor, but then why have an account with Dr. Cornelius? A few entries do show they bought or sold medicine and sundries to each other.

So unfortunately, the Cornelius ledger does not provide conclusive evidence to prove or disprove that William Clark of Ulster County was the son of Abigail Clark of Fredericksburgh, Dutchess County. But finding Abigail Clark with Secors and Badeaus suggests Huguenot roots. We may yet uncover her identity in the records of the French churches of New Rochelle and New York City.