Plus, Beacon baseball and softball eliminated

The Haldane baseball team lost to Pawling, 4-0, in the state tournament on May 22, ending its season with a 11-10 record.

Coach Tom Virgadamo said a highlight was defeating North Salem, then ranked second among Class C teams in the state, 10-4 on May 3, a day after the Tigers had handed the Blue Devils their worst loss of the season, 18-3.

Virgadamo is optimistic about 2018. “We have a lot of pitching coming back,” he said. “Our modified team had a fantastic year and the eighth-graders should help us out at the varsity level next year.”

The Beacon baseball team ended its season with a 7-4 loss to Nyack in the second round of the Section 1, Class A tournament after defeating Yonkers on May 20, 4-1. The Bulldogs finished 13-8-1, winning the league title with a 7-2 record. 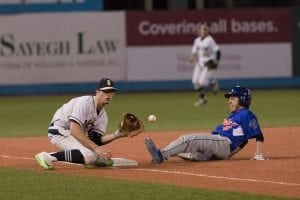 Alex Callaway prepares for the tag at third against Yonkers at Dutchess Stadium during a game in April. Beacon won, 10-1. (Photo by Dawn Sela)

The Bulldogs, seeded No. 15 in the Section 1, Class A tournament, were upset by No. 18 Somers, 25-23, on May 18. Somers led 17-8 after four innings but Beacon came back to lead by two in the seventh before the Tuskers closed it out.

Lenny Torres pitches for Beacon against Yonkers during an April game at Dutchess Stadium.