If you are going to study a culture through its cuisine, street food in South Korea provides an intense education. A deep red paste, gochujang, serves as the fiery pepper base of Korean specialties.

Clayton Smith, a 2014 Haldane graduate (and contributor to The Current) who attends SUNY Geneseo, is exploring South Korea during a semester abroad at Sogang University in Seoul, where he has developed a love for fermented hot sauce. 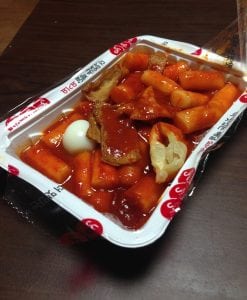 “Korean cuisine is definitely a perk of being here,” Smith says. “I find myself eating out a lot because oftentimes the food is quite cheap.”

Korean barbecue is a favorite, including pork and bulgogi, which is thinly sliced, tender beef marinated in a sweet soy sauce. He also often orders tteokbokki (pronounced dock-bo-kee), which are stir-fried rice cakes in a spicy sauce.

“I’ve heard it described as the ‘the Korean mac and cheese,’ ” Smith says. “The rice cakes are in the form of thick noodles, making for a chewy, unusual texture.” 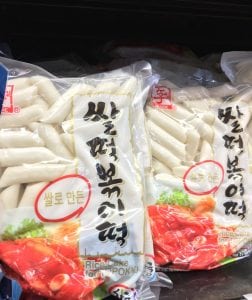 After hearing this description, I set out to make tteokbokki. I asked my friend Sung, who puts a gourmet spin on Korean home cooking, to recommend a food market. She sent me to Woo-Ri Mart in Northvale, New Jersey, where I received many suggestions from the employees and picked up a prepared serving of tteokbokki. The portion was so generous I split it with my husband, who lived in Korea before we were married and loves its cuisine.

I asked at Woo-Ri for help replicating the sauce and was directed to a supply of gochujang, which is always sold in quantity — I bought a pound packaged in a bright red tub. As I searched for the rice cakes, an employee pointed me to fish cakes used in tteokbokki and suggested dried anchovies to flavor the cooking broth. I opted out of a supersized box of tiny, briny fish and substituted an anchovy-based sauce. 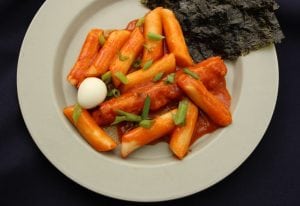 The fishy addition helped cut the pasty sauce and I served the tteokbokki with quail eggs, following Smith’s recommendation. A cool egg calms the kick.

Smith says he likes the hot flavor and chewy texture of the rice noodles because they’re so different from anything he’s eaten. Before returning home in July, he’ll take his appetite to Thailand and Myanmar. For now, he continues to practice his street-food vocabulary in Seoul.

In a shallow pan, heat half of the water and add rice cakes. Soak and simmer over low heat for 10 minutes.

In a small skillet, make a quick stock of the remaining water and fish sauce. Boil and reduce to low heat. Add gochujang, hot pepper flakes and sugar. Mix well, bring to a boil and reduce to medium heat. Add drained rice cakes and fish cakes to sauce. Cook over low heat for 5 minutes.

Spoon mixture onto serving plate, top with scallions and serve with egg.