Exhibit opens at Boscobel on June 3

Boscobel will open an exhibit on June 3 called Make-Do’s: Curiously Repaired Antiques that focuses on historic attempts to reduce, reuse and recycle. 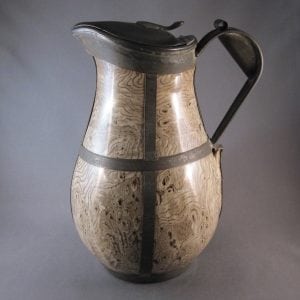 An agateware jug made in England in the mid-19th century, with alterations (Courtesy Andrew Baseman)

Make-dos are household remnants such as porcelain teapots with silver replacement spouts and/or tin handles. They also can be relics such as a decanter riddled with staples that was once owned by Washington Irving. More than 100 examples will be drawn from local, private and public collections. At some point in their history the objects met with calamity but were deemed too precious to discard. Were they repaired for practical, sentimental or aesthetic reasons?

The exhibit will be open during regular museum hours through Oct. 1, and an illustrated catalogue with essays by curator Jennifer Carlquist and collector/designer Andrew Baseman is available at the Boscobel gift shop.

A Repair Café co-organized with the Desmond-Fish Library will take place on June 17, and a panel discussion moderated by design historian Glenn Adamson and a lecture by Baseman are planned. See boscobel.org.