Coulter Young wanted to manage a gym. But an aptitude test said “art.”

Coulter Young barely took an art class beyond what was required while growing up in Mahopac. He was certain he wanted to go into athletic club management and during his senior year in high school completed an internship at what is now Club Fit.

He was also an avid skier and persuaded his parents to let him attend Green Mountain College in Vermont so he could hit the slopes while he studied recreational management. 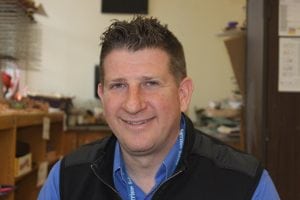 Coulter Young (Photo by A. Rooney)

That’s where he took an aptitude test given to all freshmen. “Dear Coulter,” read the results, “you scored 95 percent on arts and 5 percent on management.”

Surprised but intrigued, Young switched his focus to the arts.

Three decades later, Young is an established illustrator and painter who, for the past seven years, has taught art at the Garrison School. His solo show, Triptych, opens at the Catalyst Gallery in Beacon on June 3.

After earning an associate’s degree at Green Mountain, Young continued his studies under illustrator Alan Cober, who encouraged him to come to SUNY Buffalo, where Cober taught.

Haystacks at Wethersfield, by Coulter Young

“I enjoyed doing illustration because it is primarily drawing,” Young says. “It blossomed because [as students] we were exposed to so many different applications such as editorial work and portraits and assignments like having to summarize an entire article in one picture.”

Young says one highlight of his time in Buffalo was a class visit to the studio of Philip Burke, a longtime illustrator for Rolling Stone, to watch him paint a portrait of Joni Mitchell.

“I had spent years tearing out the caricatures [in the magazine] and putting them on my wall,” Young recalls. “I brought my sketchbook and showed it to Burke. He hired me as a helper and, eventually, as an apprentice. 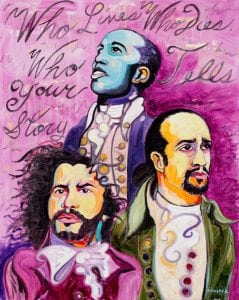 “I was able to see his technique and method, and then I added my brushstrokes. I mimicked his style, then grew it into my own. It was learning on the spot, so different from being in a class.”

When Young’s father told him about the artist colony developing in Peekskill, Young headed downstate. He lived with his father in Cortlandt Manor while renting a studio in Peekskill, where he worked from 1994 to 2003. In 2000, he also opened a gallery in Peekskill, which he ran for three years with his wife, Jeannine.

Young says he noticed that many artists who came to the gallery were from Beacon. The couple decided to visit and in 2003 bought a house there. “This coincided with me wanting to go back to grad school,” Young says. “I had something like seven part-time jobs and needed to change that.” 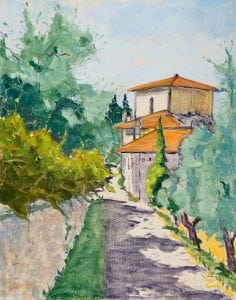 A plein-air painting of an Italian landscape by Coulter Young

While working as an art handler and installer, in 2006 Young earned a master’s degree in visual arts education from Manhattanville College. He worked short-term teaching jobs before being hired at Garrison, where he teaches students from kindergarten to eighth grade. “The biggest challenge of the job is making everything age-appropriate,” he says. This summer will also be his 21st teaching at the Harvey School camps in Katonah.

At his upcoming show at Catalyst, Young says he will focus on three genres. The first is expressive portraits. While the vast majority are of musicians, the show also will include portraits of Burr, Lafayette and Hamilton from the hit musical, which Young says came out of his 10-year-old daughter’s obsession with it. 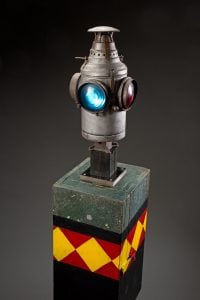 Beacon, an assemblage by Coulter Young

There will also be “assemblage” — sculptures which combine outdated technology and found objects from flea markets and tag sales.

Finally, there will be plein-air paintings that reflect Young’s studies with Andrew Lattimore in Cornwall.

“I decided to start over, in a sense, working with him, doing observational drawings with pencil and charcoal, learning more formally how to paint a still life and landscapes,” Young explains. In 2014 Lattimore organized a trip to Italy for his students, “which was a game-changer for me,” says Young. “I went back in 2016 to Panzano in Chianti and work that I did there will be in the show.”

Triptych runs through June 25. An opening reception is scheduled for 6 to 9 p.m. on Second Saturday, June 10, at the gallery, located at 1137 Main St. See catalystgallery.com.

2 thoughts on “A Change of Course”