Focus on hiking, biking and traffic

But when county emergency services officials attended a May 24 Town Board workshop, a meeting of the minds occurred on issues that know no geographic or other limits — hazardous traffic and bicyclist and hiker safety. 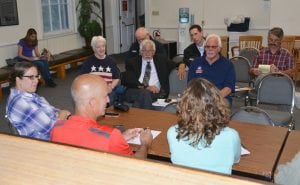 Led by Bureau of Emergency Services Commissioner Anthony Sutton, the county delegation included members of the Emergency Services Safety Advisory Board, among them new recruit Amber Stickle, director of recreation and parks for the Philipstown Recreation Department.

The board, which includes community members and firefighting, emergency medical and law enforcement personnel, identifies and studies safety problems and recommends solutions.

Many topics the group discussed are familiar to Highlands residents. But another may be less so: the growing number of bicyclists and the threats they face from cars.

Sutton mentioned a 2016 accident on Route 301 in which a driver who was texting hit a cyclist and left him severely brain-damaged. Other cyclists are now campaigning for enhanced road safety, Sutton said, although they “didn’t get a real warm welcoming” at the state Department of Transportation. But they did get the attention of the county safety advisory board.

“We have bicyclists along 301 getting hurt, so we’re trying to help them and reduce the need for responses by our firefighters and EMS,” said Robert Lipton, deputy commissioner of emergency services for the county. 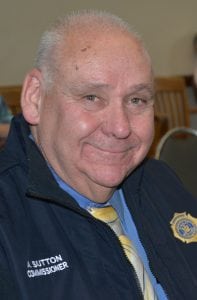 Sutton said the conversations produced a simple idea: keep roadside brush cut so it does not force cyclists into the center of narrow roads.

“That’s something that will have a big impact right away,” said Philipstown Supervisor Richard Shea, who often rides along Route 9D. Shea also advised cyclists to ride in groups.

Stickle suggested that local governments work with Metro-North to create  tip sheets for visitors who bring their bikes aboard trains.

Sutton pointed to an emergency services dilemma: which rescuers to dispatch. “It seems a lot of times we get sucked into sending the fire departments up the mountain” instead of park rangers and police, he said. Typically this is because firefighters are closer than park rangers, who may be up to an hour away, he said.

Shea mentioned another problem: graffiti on the rocks. “The toll on the mountain with people defacing the place is awful,” he said.

The town and county group likewise discussed the Route 9D speed limit, which for a stretch north of Cold Spring is 55 mph (despite the many pedestrians who use the road to reach trails), although it is 45 mph going south from Beacon and is also lower in Garrison.

“This discussion has been going on and on for years,” Shea observed. He said the state apparently won’t change the 55-mph sign until work concludes on the Fjord Trail, a planned path between Cold Spring and Beacon.

Councilor Nancy Montgomery suggested the county help pressure the state to act sooner. Sutton agreed. “Collectively we should all have our voices heard,” he said. 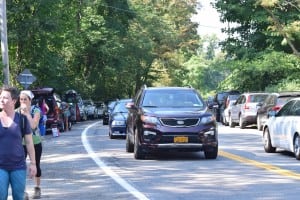 In Cold Spring, too, cars endanger pedestrians, even around the Haldane school campus, Shea added. Some drivers don’t stop for a crosswalk even when a crossing guard is present, he said.

Sutton and Lipton proposed measures such as flashing signs that inform drivers of their speed and remind them of the limit.