Purchased at auction for history museum

On May 21, Christopher Radko and Seamus Carroll purchased at auction for $1,850 a painting by the late Hudson River painter Michael Kelly. It depicts a community gathering outside the building that is now the Putnam History Museum: a tag sale at the former West Point Foundry School on Memorial Day 1961 (note the U.S. flag at half-mast). The sale was held to raise money for renovations after the historical society bought the building. 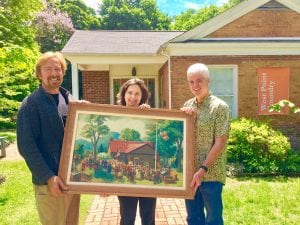 Kelly studied at The Art Students League of New York in the 1930s, and he and his wife, Rosa, opened the first antique shop in Cold Spring in 1950. “It was the prettiest village that ever was,” Rosa Kelly once told The New York Times. “My husband could stand on any corner and paint a picture.”

Preston Pittman and the museum also contributed funds for the painting, which Radko and Carroll presented to the museum’s executive director, Mindy Krazmien, on May 24. It had been in a private collection.