Cold Spring and Philipstown agreed in votes on May 23 and 24 to consolidate their building departments, at least for a year, with the town’s full-time building department taking over the functions of the village’s part-time department. The village will pay the town $20,000 annually to cover costs.

The Village Board and Town Board approved the merger by 5-0 votes. The contract provides that the town and village equally divide any fees collected above $20,000 annually for Cold Spring properties.

The merger, which began at the start of the village’s fiscal year on June 1, evolved from several years of sporadic discussions that at times included the Village of Nelsonville. It dovetails with a push by Gov. Andrew Cuomo for local jurisdictions and counties to streamline.

The Cold Spring Building Department continues to exist, if only on paper, because the village will outsource its work to the town. Philipstown Supervisor Richard Shea said that provides some flexibility as the village does not have to dissolve its department, which would involve a lengthy legal process, and move everything to Town Hall.

An inter-municipal agreement also “allows us to sort of wade into it,” Shea said. The village and town tested the waters in September 2015 when Philipstown began handling inspections for the Butterfield redevelopment in Cold Spring.

Under the agreement, Cold Spring residents will file building applications at Village Hall, where officials will review them before sending them to Philipstown. Cold Spring will retain its records.

The Village Board approved the merger with little comment. 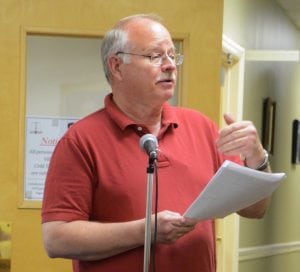 She said that even if she does not pay the town inspector directly, she will pay in her Philipstown tax bill. (Village residents pay taxes to both the village and town.) Furthermore, Moser maintained, although village officials frequently insist Cold Spring is “cash strapped,” they now will pay Philipstown $20,000. She likewise asked why “there wasn’t more public information about this,” although she added, “I’m not blaming you guys.”

Shea responded that the merger gives Cold Spring residents access to a building inspector 40 hours a week, rather than the 16 hours that the village’s part-time inspector, Bill Bujarski, was on duty. The village building department was open on Wednesday from 10 a.m. to 4 p.m., or by appointment on Monday and Friday. Inspections took place only in the afternoon. The Philipstown building department, at 238 Main St., is open weekdays from 8:30 a.m. to 4 p.m., and has three full-time employees and a part-time secretary. Shea said the town may add another employee part-time.

In an emailed statement, Bujarski, who became the Cold Spring inspector in December 2009, said he had enjoyed working with residents and business owners. “I hope I have taken this department into a new era with tracking of each project with a reference number so each application or complaint could be easily found,” he wrote. “I am leaving knowing that I did my best with the limited resources available to this small department.”

Forms can be downloaded at philipstown.com or coldspringny.gov. Applications for Cold Spring properties should be dropped at Village Hall, 85 Main St.

Shea noted that Cold Spring requested the merger. “We’re just trying to accommodate them and also consolidate services, a major thrust from Albany right now,” he said. “If we don’t start showing some initiatives, we’re going to lose our state aid.”

Councilor Nancy Montgomery noted that without a merger the community would continue to have three building departments – for Cold Spring, Philipstown and Nelsonville – along a half-mile stretch of Main Street.

Nelsonville talked about merging its department two years ago but withdrew. At its Village Board’s May 15 meeting, Mayor Bill O’Neill said that joining Cold Spring and Philipstown “theoretically looks perfectly acceptable. But the devil is in the details.” Trustee Thomas Robertson said the three-member board (expanding to five in 2018) is not against a merger. But, he asked, “how much is it going to cost? It’s a good idea, but I like to walk slowly toward consolidation.”