Beacon Mayor Randy Casale, at left, is shown with other officials and West Point cadets on May 25 at the opening of a new trail bridge on Bannerman’s Island. It was built by the United States Military Academy’s Class of 2017 engineers. Tours take place on Bannerman on Fridays, Saturdays and Sundays through October. See bannermancastle.org. 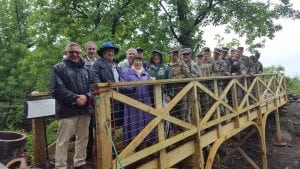