A sign in the window of the Marion Royael Gallery on Main Street in Beacon promises “Directed Migrating Installations.”

Steve Riddle, who co-owns the gallery with his wife, Barbara, explains: “It’s directed because we determine the theme of the exhibit, migrating because some of the work changes during the exhibit — things go in and go out — and installation, well, that’s obvious.” 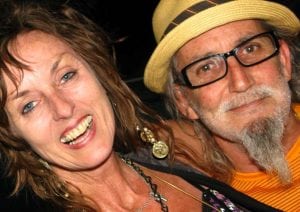 While a typical gallery might display an artist’s work for a month, Marion Royael (named for Barbara Riddle’s late mother) organizes shows quarterly. The couple has operated the gallery for eight years, first on one end of Main and now at the other. Working with a stable of about 25 artists, they fix on a broad theme — currently it’s Human Kind, Inside Out — and present it to contributors as a blank slate. Each artist submits a piece or pieces that usually are not seen by the gallery owners until they arrive and are unpacked.

The results are apparent. Here is a sculpture hanging from the ceiling, there is a slide projection encased in a light box, and everywhere there is art, much of it colorful, each piece distinct but under the same, slightly off-kilter, umbrella. Yet, taken together, the disparate works do seem to create a whole.

“We consider the gallery one piece,” says Steve Riddle. “All of the artworks are players in the piece.” His wife adds that while some abstract pieces may not “look” like they fit, “we always talk to the artist about their connection to the theme so that we can explain it to our clients.” 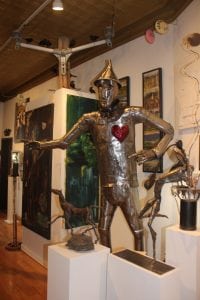 Sculptures and paintings, among them the Tin Man and his heart, in “Human Kind, Inside Out” (Photo by A. Rooney)

The current exhibition, which has contributions from about a dozen artists, includes works by the gallery owners, who met in Medford, Oregon, while working for a service company which had clients with developmental disabilities for whom they began an art therapy program. Later, the Riddles hit the road, landing in St. Petersburg, Florida, where they rented space in what had been a supermarket and turned it into an art center.

They later moved to Warwick, New York, and were helping friends run a gallery in Port Jervis when they decided to strike out on their own. They scouted New Paltz, Kingston and Rhinebeck before discovering Beacon. When their first lease expired, the couple toyed with relocating to Manhattan, but instead headed west down Main. The new space includes a backyard garden used for outdoor installations. 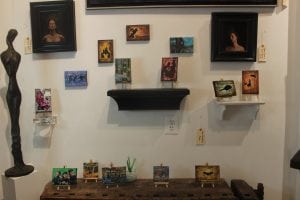 “Human Kind, Inside Out” brings together disparate art to form “one piece.” (Photo by A. Rooney)

Although there is, of course, a bottom line, the Riddles say they are more interested in having artists stretch their visions. “We love it when artists take a chance,” says Barbara. “Sometimes they’re apologetic about it, but for us that’s always more important than making a sale. A sale is not your validation.” No matter their individual styles, artists come together during shows. “We’re connected by this tiny critical mass of thinking,” she says. “Artists can be very much loners and this is a mass of thought, a connection.”

Marion Royael Gallery is located at 159 Main St. It is open Monday and Thursday from noon to 5 p.m. and Friday, Saturday and Sunday from noon to 7 p.m. See marionroyaelgallery.com.