Deep in the woods, they sang nearly forgotten ballads

In August 1919, a professor and “songcatcher” named Franz Rickaby set out to preserve the ballads sung by lumberjacks in the deep pine forests of northern Wisconsin, Minnesota and North Dakota. In 1926, months after he died at age 35, Rickaby’s book Pinery Boys: Songs and Songcatching in the Lumberjack Era, was published by Harvard University Press.

Nearly a century later, the book has been reissued with a biographical essay by Gretchen Dykstra, a Cold Spring resident who is the founding president of the National 9/11 Memorial Foundation. She also happens to be Rickaby’s granddaughter. 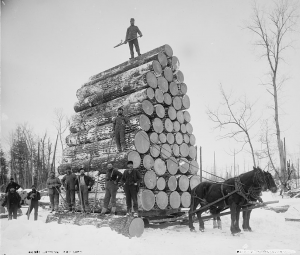 Lumberjacks in Michigan (Library of Congress)

On Thursday, June 15, Dykstra will present a free program on American work songs at 7 p.m. at the Towne Crier Café in Beacon. She will be joined by historian and writer Steve Blamires of Beacon. Both are board members of the American Center for Folk Music, which is sponsoring the event. Reservations can be made at townecrier.com, and copies of Pinery Boys will be available for sale.

When he died, Dykstra’s grandfather left behind a wife and 4-year-old son — her father. As a child, she knew her grandfather’s history and had a copy of Pinery Boys “but never read it and certainly never read until recently the many letters, poems, journals and articles he wrote that my grandmother kept in her old brown trunk,” Dykstra writes in her essay. “They show his restless curiosity, something I saw in my father, which I inherited too.” 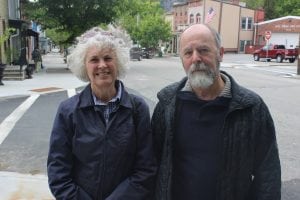 Gretchen Dykstra and Steve Blamires (Photo by A. Rooney)

The discovery of those papers inspired Dykstra to retrace his steps. “He was one of a handful of academics, amateur folklorists and adventurers intent on preserving the ballads that told in music and words the stories of the people who shaped America,” she writes. By retracing his journey, “I was able to piece together what motivated him — including, I believe, his own poor health and his desire to preserve the lives of other people who were dying, too.”

She adds: “My grandfather knew time was short and the lumberjacks were disappearing rapidly. He spent four years chasing and trying to find people who remembered the songs. I had phones and internet to guide me — he had postage and branch rail lines and, in the end, rheumatic fever.” 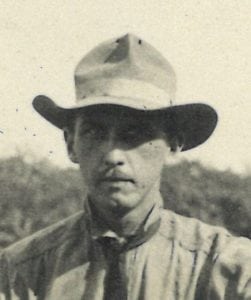 Some of Blamire’s work involves taking people to hear music in the places it was created, frequently the northern Scottish isles, where he grew up. “I speak Gaelic so I knew what the songs meant and am familiar with many of the places mentioned, going back to 12th-century ballads about people who actually existed,” he says. “With work songs, generally they’ve been created by people to maintain a rhythm or to sing about their work.” Often they were sung by people who were isolated: cowboys, slaves, miners, textile workers, sailors. They were a challenge to preserve because the people who sung them “were not living in communities where songs could be easily passed down.”

Lumberjacks were an embodiment of this, Dykstra explains. “They were not a racially diverse group, but they were ethnically diverse,” she says. “Working in the forest, with cold winters, inspired camaraderie, and lumberjacks looked for those who had strong voices to join them. Cooks and singers were treasured because they could keep them warm. These are the stories of a particular place.”