Recognized for reporting and advertising design

The Highlands Current won six reporting and three advertising design awards in the annual Better Newspaper Contest sponsored by National Newspaper Association, whose members include community newspapers from around the country. The winners were announced on June 5. 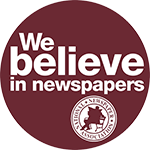 Brian PJ Cronin won first place for best feature story among non-daily papers with circulations of 2,000 to 3,999 for Saving Ethel Rosenberg, which described the efforts by a Philipstown man to receive a pardon for his mother, who was executed in 1953 on charges of treason.

Gregory Gunder and Michael Turton won third place among all papers with circulations of 3,000 to 5,999 for video journalism for their report on a group of Cold Spring veterans visiting Washington, D.C.

Kimberly Hiss won an honorable mention for best education/literacy story among non-dailies with circulations of less than 6,000 for her report, Is Cursive a Dying Art?

In the advertising division, layout editor Kate Vikstrom won first and second place among non-dailies with circulations of less than 5,000 for her color ads “Our Town Thank You” and “Come to the Pink Elephant Tag Sale.” She also won an honorable mention for best small ad among non-dailies under 5,000 circulation for “Fine Plus Rare Wine.”