The good news is that the Environmental Protection Agency can predict when Highlands residents will be able to eat fish caught in the Hudson River.

The bad news is that most of us will be dead by then.

In a draft progress report released on May 31 on General Electric’s cleanup of PCBs it dumped into the Hudson River over 30 years, the agency estimated it would take about 55 years before fish are safe to eat once a week. In 2002 the EPA ordered the company to remove at least 2.65 million cubic yards of PCB contaminated sediment from the Upper Hudson.

After years of legal wrangling, GE began dredging in 2009. Last year the company dismantled its facilities and declared its work was done. 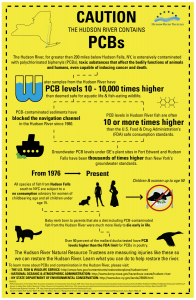 However, GE is not off the hook. The EPA declined to issue the Certificate of Completion the company requested, and work is still underway to determine the extent of the contamination of some floodplains. Also, the agency will continue to monitor the river’s sediment and its fish and can order GE to resume work.

Catherine McCabe, acting regional administrator for the EPA, said further dredging wasn’t cost-effective, a requirement of the Superfund law that allows the agency to order the cleanup. While GE has spent $1.7 billion on the project, the EPA estimated that another $500 million in dredging would only increase the time to recovery by five or six years.

The report drew sharp criticism from both lawmakers and environmental groups who charged the EPA is discounting contrary reports by a consortium called Hudson River Trustees that includes the state Department of Environmental Conservation, the National Oceanic and Atmospheric Administration and the U.S. Fish and Wildlife Service.

Althea Mullarkey, an analyst for Scenic Hudson, said the EPA’s report “makes absolutely no sense” considering the condition of the river. Scenic Hudson and others argue that the targets given to GE are based on measurements of the pollution in 2002 that were later found to be inaccurate because of what Manna Jo Greene of Clearwater described as a “false bottom” of debris from lumber and paper mills at the river basin near Fort Edwards. Once that material was removed by dredging, she said, readings in 2010 found the levels of PCBs to be two to three times higher.

Greene believes the EPA was reluctant to adjust the targets because it feared GE would launch a protracted legal battle. “They took the path of least resistance,” she said.

Although the EPA typically does not accept public comment on its reports, it will in this case, through Sept. 1. Write EPA Region 2 Director Gary Klawinski at 187 Wolf Road, Suite 303, Albany, NY 12205 or email [email protected] A public hearing will be held at 6 p.m. on Wednesday, June 28, at the Poughkeepsie Grand Hotel, 40 Civic Center Plaza.

Walter Mugdan, the acting deputy regional administrator and a longtime local EPA official, signed off on the report, rather than newly appointed EPA chief Scott Pruitt, although the agency says Pruitt was briefed on its findings.