Sean Patrick Maloney, the U.S. House member who represents Beacon and Philipstown (and who lives just up the hill from Cold Spring and Nelsonville) detoured on his way to Washington, D.C., on June 6 to meet with The Current.

In a wide-ranging interview at a village coffee shop, the three-term Democrat touched on the opioid-heroin crisis, environmental issues, healthcare, President Donald Trump, Russian interference in American elections, and whether the Democratic Party should abandon rural areas and “Trump districts” like his own 18th. 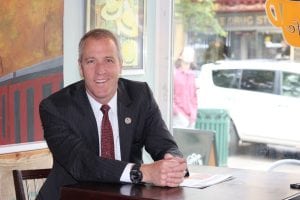 He also repeatedly endorsed bipartisanship, saying that “despite all the partisan heat and noise” on Capitol Hill, “there’s a deep desire among many of us to work together on solutions. And it doesn’t have to be everything we want. Most of us would take imperfect progress over perfect gridlock.”

Some of his remarks, edited for conciseness, appear below.

In March, Maloney introduced a bill, currently in committee, that would allow police officers to send non-violent drug addicts to treatment instead of jail.

“It’s a simple idea,” he said. “Just skip the criminal-justice part and take non-violent, addicted people to treatment and keep them there as long as you can. The police officer always retains the option of arresting someone if they present a danger to themselves or others.

“We’re not talking about letting criminals off the hook. We’re talking about combatting drug addiction first and foremost as a public health crisis, because that’s what works: We’ve seen studies where we have much better success rates, far lower recidivism, and a reduction in street-level crime — the petty crimes addicts engage in to get a little money to get high.

“A number of Republicans support my legislation, including the county executive and district attorney in Dutchess County and the district attorney in Orange County. This is not a partisan issue. Everywhere I go I hear about funerals, about destroyed lives. We need better tools to stop it. And we can spend less, because treatment is cheaper [than imprisonment].

“Cops tell you they’ve arrested the same person 30, 40, 50 times. It’s not doing anything except costing taxpayers money and eating up the time the police should be using for something more productive.”

The U.S. House on May 4 passed the American Health Care Act (“Trumpcare”) to replace the Affordable Care Act (“Obamacare”) by a 217-213 vote. Maloney, like all other Democrats in Congress, voted against it and has since been an outspoken critic. The Senate must now pass its own version of the bill.

“One of the reasons I’m so opposed to Trumpcare is that it would gut the Medicaid funding we need to fight the heroin epidemic, because that’s how we pay for the treatment,” Maloney said. He said he is “looking very closely” at the viability of a single payer system in which a public agency organizes health-care financing, but “what’s more important in the short term is to fix what’s not working in the Affordable Care Act, because that’s what we can get done.”

The ACHA is not the answer, he said. “Trumpcare is a disaster. It would dramatically increase health-care costs for people who are already vulnerable, all to give a big tax cut to the rich. That does nothing to fix what’s wrong with the ACA.”

“The real problem in healthcare is why it costs so darn much, and there’s a lot we can do to fix that short of trashing the whole system.”

Maloney’s proposed Anchorages Away Act would require the U.S. Coast Guard report to Congress on the potential impact of a proposal to increase the number of oil barge anchorage spots on the Hudson,  including between Beacon and Newburgh. The House Transportation and Infrastructure Committee incorporated the Anchorages Away Act in the Coast Guard Authorization Act, which the committee approved May 24. In March he introduced a related bill to ban oil-barge anchorages within five miles of a nuclear power plant, a spot on the National Register of Historic Places, a Superfund site, or the critical habitat of an endangered species – essentially covering the river from Yonkers to Albany.

“It’s my intention to drag this thing out long enough to kill it,” he said. He noted the proposal drew more than 10,000 negative public comments and that both Democratic and Republican leaders at the county and state level oppose the plan.

“We have a real issue with clean water” and pollution, whether PCBs in the Hudson River (see EPA Says River Clean Enough, June 9) or contamination in Newburgh’s drinking water, which was imperiled by hazardous Stewart airport run-off into Washington Lake, a city reservoir.

“What all these things have in common is we need to understand the threats to municipal water supplies and the health effects on the human body of certain types of contaminants,” Maloney said. He recently drafted legislation to require the Environmental Protection Agency to test water supplies for all communities with fewer than 10,000 residents, just as the agency does for communities with larger populations.

“Most of the communities I represent are fewer than 10,000 residents,” he observed. “We should have universal testing of all water supplies. It won’t cost a lot of money and is the critical first step in knowing if you have a problem.” In March, Maloney introduced legislation calling for a federal study to determine the safe levels in the human body of perfluorooctanoic acid (PFOA) and perfluorooctane sulfonate (PFOS), the pollutants discovered in Newburgh.

Maloney has made it clear he is no fan of the president’s leadership. In a forum in Jan. 8 at the Desmond-Fish Library in Garrison, before Trump had been inaugurated, Maloney called him “such as weirdo,” and advised those who opposed him “not lose hope” because “the shock absorbers built into American democracy are strong enough to contain even this guy.”

On June 6, after Trump had been in office for four months, Maloney said he was “deeply disappointed in the way the president has begun.” On the bright side, he said, “we have seen an unprecedented level of citizen engagement. I’m not one of those Democrats who wants the president to fail. I want him to stop tweeting and do his job. 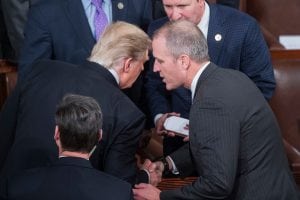 Rep. Sean Patrick Maloney greets Donald Trump on Feb. 28 after the president addressed a joint session of Congress. Maloney later said he asked Trump to keep in place regulations protecting federal employees who are gay. “He said he would,” Maloney wrote on Twitter. (Photo By Tom Williams/CQ Roll Call)

“What’s clear is the approach he’s taking is not working. If you believe like I do that we don’t have a presidency to waste, you can’t take any pleasure in his troubles. There remains a large group of us in the House and Senate who want to work with the president on things that need to get done: infrastructure, tax reform, balancing the budget.

“The president is going to keep failing until he learns the basics. We have a Constitutional system. The way to make it work is to listen to both parties and set aside ideology and ego and ask what we can get done, and what we can agree on, and what’s going to make things better. When he gets tired of doing nothing, or failing on Capitol Hill, he needs to realize there’s a way forward.

“The dilemma I’m describing for the president is no different than the one I face. I can go around and pretend to be doing things. But it would all be a sham if I wasn’t working across the aisle; that’s where progress exists. Right now he’s pretending to be president, engaging in a lot of make-believe. Real progress is going to require him to work with the other party.”

As Congress and an independent special counsel investigated Russian involvement in the 2016 presidential elections, Maloney said that getting at the truth “shouldn’t be a partisan issue. I don’t believe there’s any evidence Russian interference changed the outcome of the election. But it’s serious enough that they were engaged in an unprecedented effort to influence the election, and tamper with our [polling station] systems, and hack one of the major political parties. We should let the investigation proceed. It has to be thorough. We have to get the facts. And it has to be fair, something all of us, in both political parties can trust and believe, because this is serious.”

“Everybody should feel pretty good about our Constitutional system right now,” Maloney said. “You see it working with remarkable fidelity to the founders’ design. Look at the way Congress is engaged in oversight of things like Russian influence in the election – it’s not perfect, but it’s happening and professional law enforcement agencies like the FBI are continuing to do their job despite presidential interference.

“Look at the way the First Amendment is protecting an energized free press that’s holding the Trump Administration’s feet to the fire. Look at the way our independent federal judiciary is demanding that the president’s travel ban conform to the Constitution. Yes, the system is working. But right now it’s working to contain damage. It should be working to generate progress. Yet that requires the president to get productive and get serious.”

After the 2016 elections, House Democrats asked Maloney to lead a review of why the party did not fare better. Nationally, the Democratic Party also has been debating whether to stop trying to win Congressional elections in Republican-dominated states.

Maloney says they “absolutely should not” abandon those areas to Republicans. “As someone who represents a Trump district” where a majority of voters voted for the president, “I feel very strongly that we can’t keep talking only to people who already agree with us. We have to build a relationship with the millions of Americans who just want a better life.

“I represent a rural district. It certainly wouldn’t be good for me if we wrote off Trump districts. I’m in one. And there’s every reason to believe the Democrats can win again in a lot of Republican districts if we start talking about the things people care about, and build a relationship with those voters based on respect, and start understanding their everyday lives and their concerns. It’s about getting back to the basics.”

One thought on “Maloney on Opioid Crisis, Environment, Healthcare — and Trump”