Here’s what to do to protect your trees

If you have trees in your yard, you’ve likely been bugged out by gypsy moths. The good news is that the cool, rainy weather affects them, too, because a fungus that kills the larvae thrives in these conditions. The dried husks of caterpillars hanging on trees is a sign it’s having an effect, although we won’t know until next spring if it’s curbed a population that has been exploding in recent years.

Gypsy moths hatch from eggs laid the previous summer and indiscriminately defoliate hundreds of types of ornamental, forest, and fruit trees and shrubs. 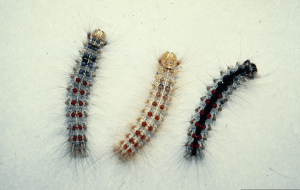 Gypsy moth caterpillars as they will appear if feasting now on the foliage of your trees and shrubs (USDA/Bugwood.org)

Leaves mean everything to a tree’s health and vitality. They provide the food that trees store to survive over the winter. If trees lose their leaves to gypsy moths in the spring, they must use the energy they would be storing for the winter to grow new leaves. The new leaves also won’t be as full of chlorophyll or ready to soak up the light a leaf needs to make sugars and carbohydrates.

Bruce Fraedrich, a plant pathologist with the Bartlett Tree Research Lab, found in a study that a tree’s full recovery from being defoliated can take as long as five years. Most hardwoods are expected to be able to sustain two seasons of defoliation from gypsy moths before they die but evergreens may be susceptible after a single attack.

The good news is that enemies of the gypsy moth such as the fungal pathogen Entomophaga mamaiga have been gaining strength. A long-term study at Cornell led by Ann Hajek has found the fungus is now the leading cause of decline in gypsy moth density.

But now comes the difficult part: What can you do? If you find leaf damage, the first step is to identify the cause. Gypsy moth caterpillars hatch in April and May and so are visible now. You might see them hanging by a silky thread and swinging in the wind. Even though they’re dangerous to my trees, I find their life cycle kind of cool. They shed their skins multiple times. The female has six growth stages and the male has five. Fully grown, the caterpillars are about 2 inches long. 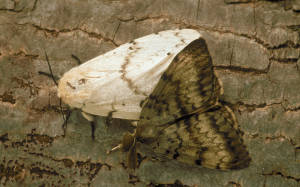 They go into a pupa stage for about two weeks, after which the moth emerges. By late July and August, the females (white moths that don’t fly) lay hundreds of eggs on the tree that will hatch the following spring.

Intervention is possible at any of these stages. Eggs can be scraped off the tree. (Look for dense, hairy and buff-colored  masses on trunks and under branches. They’ll be hard and feel velvety.) Caterpillars can be captured and dumped in water mixed with soap or detergent. Since the caterpillars move up the trees, wrapping a band of cloth like burlap can be effective in trapping them. Check it daily, although I’ve been warned that in places where there are large populations, this is more of a “feel-good” method.

If you have a high-value planting — something that means a lot to you or to the habitat, for whatever reason — consult an arborist for possible insecticide applications. Be careful about using insecticides on trees that are in their flowering cycle. Anything that will kill a gypsy moth caterpillar probably also kills a pollinator that is attracted to the flowers.

For more information on pesticides, see Virginia Tech’s online resource or the state Department of Environmental Conservation’s fact sheets. The DEC site also has information about participating in a sampling on your property to help track the moths.