In a country that so values the Stars and Stripes as a national symbol, the annual celebration of Flag Day on June 14 is remarkably low-key — unless you live Hudson or Saratoga, New York, or Waubeka, Wisconsin.

In Hudson, Flag Day was observed on June 10 with festivities that included a 10-band parade and fireworks over the river. On the same day Saratoga held its 50th annual Flag Day parade. 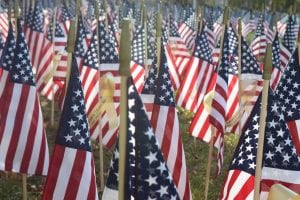 A field of flags (Photo by M. Turton)

In 1861, Charles Dudley Warner, a newspaper editor in Hartford, Connecticut, suggested the establishment of a national holiday on June 14 to mark the day in 1777 when Congress adopted the U.S. flag:

“Resolved: That the flag of the United States be made of 13 stripes, alternate red and white; that the union be 13 stars, white in a blue field, representing a new constellation.” 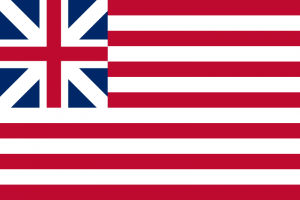 FIRST FLAG? — The Grand Union Flag, a.k.a. the Continental Colors, was hoisted on the ship Alfred in Philadelphia on Dec. 2, 1775 by Lt. John Paul Jones.

But the idea didn’t take off until 1885, when Bernard Cigrand, a 19-year-old teacher in Waubeka, first had his students write essays on the significance of the flag, which then had 38 stars.

Cigrand devoted the rest of his life to promoting the flag, giving more than 2,000 speeches and founding the National Flag Day Association. In 1916 President Woodrow Wilson gave the day official recognition. In 2004, Congress named Waubeka as the birthplace of Flag Day.

Treatment and handling of the flag is governed by U.S. Code Title 4, Chapter 1. It is considered advisory, as there are no penalties for violations. 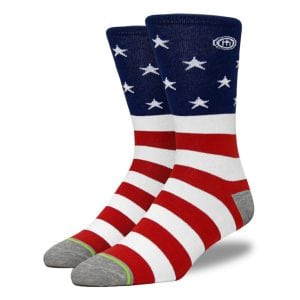 Don’t tread on me. 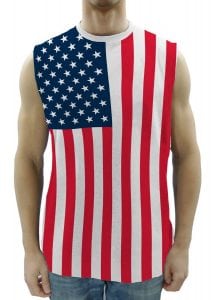 This should not happen.

When the flag is in poor condition, it should be destroyed in a dignified manner, preferably by burning.

Philipstown residents can drop off tattered or faded flags at the Cold Spring Village Hall, 85 Main St., through July 3 during business hours. They will be ceremoniously retired after the 4th of July.