Beacon residents push back against development

Dan Aymar-Blair says he didn’t set out to be an organizer. It’s just that he kept hearing the same question from his Beacon neighbors and friends: “How could this happen?”

They were talking about the rapid growth in the number of apartments and condos in the city, where more than 400 residential units are in construction at various sites within Beacon’s 5 square miles. Another 100-plus units have been approved, more than 400 are being considered by the Planning Board and 300 are “in discussion” but have not been submitted for review.

An intense discussion of these numbers began on Facebook about 10 days ago, and the voluminous dialogue quickly translated into offline reality. Suddenly, “boom! — it was like releasing this pent-up energy that was ready for discussion,” notes Aymar-Blair, one of the organizers of the newly formed Beacon People’s Committee on Development. 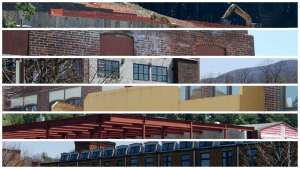 Can you identify each of these six Beacon developments? Scroll down for answers. (Photos by J. Simms)

The grassroots organization will have its first meeting at 7:30 p.m. on Thursday, June 22, at a home in Beacon. The plan is to discuss what the group perceives as overdevelopment, and to come up with ways to share their concerns with city leaders. For details, see the committee’s Facebook group.

“The things we’re hearing from people is that they don’t understand the process,” Aymar-Blair said, so the meeting will include discussion of the newly updated comprehensive plan.

City officials seem willing to be part of the conversation. Mayor Randy Casale said during the June 12 City Council workshop that he plans to hold town hall meetings to address the “buzz” on development and answer questions.

While the pace of the growth may seem overwhelming, Casale says it’s largely going according to plan.

“What’s happening now is the comprehensive plan is getting built out, and people are getting nervous,” he said. “Some of the problems that people are talking about, like parking, we have been addressing. It will take time to get to where we need to get with it.” 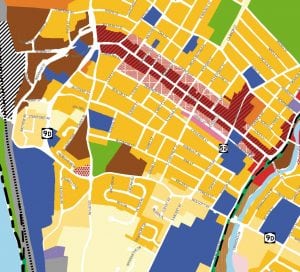 Detail from a map of future land use in the Beacon Comprehensive Plan. The dark orange is medium- to high-density residential (10 to 15 dwellings per acre), dark red is the Central Business District, dark blue is religious / cemetery / institution, green is open space and dark brown is high density (16 to 50 dwellings per acre).

Following several well-attended public hearings, the City Council in April adopted changes to the comprehensive plan that significantly scale back development plans included in the 2007 document.

The principal changes include the rezoning of much of Beacon’s waterfront district as parkland, while limiting the density of development on the east side of the Metro-North station. Land to the north and adjacent to the station (east of the tracks) is being rezoned for waterfront development, with heights restricted to preserve views of the Hudson River.

The city had encouraged development in the waterfront, including a hotel, but persistent flooding and other environmental issues led planning officials to switch gears. 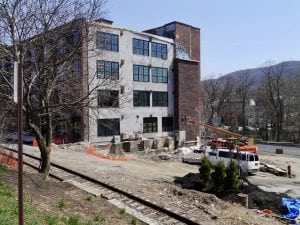 The development underway at 1 East Main (Photo by J. Simms)

The revised comprehensive plan locates  the highest-density development northeast of the train station, in a “linkage” zone that connects the waterfront with Main Street, in the Main Street Central Business District, and along the Fishkill Creek on Beacon’s east side.

“Most folks I know aren’t anti-development, per se,” says Scott Tillitt, the founder of Beahive on Main Street. “But they are justifiably concerned about the rapid pace of development and all the real side effects of that: environmental impacts, traffic, city infrastructure, affordability, schools, etc.”

It’s not just the volume of construction that has people concerned, he said, but “input from residents, the aesthetics of the buildings, motivations of the developers, scale, plus a sudden influx of new residents,” must be considered as well.

The Newburgh-based Pattern for Progress issues regional housing reports each year, and Joe Czajka, executive director of the organization’s Center for Housing Solutions and Urban Initiatives, says the perception among housing professionals is that Beacon officials are being prudent. He noted their regular attendance at Pattern’s Mid-Hudson Mayors Forums and other training events.

“They’re always asking questions about proper growth rate,” he said. “They’re doing their best to do their homework.” 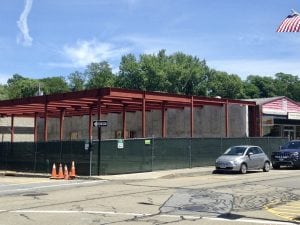 The development underway at 344 Main St. in Beacon (Photo by J. Simms)

Earlier this year, the City Council revised Beacon’s housing laws to require developers to include more affordable units as part of their projects and expanded the pool of people who are eligible for below-market rates. The city also sold a 3.14-acre parcel of land adjacent to City Hall to developer Ken Kearney for less than its appraised value with the understanding that Kearney would build affordable housing there. (His 98-unit project, which includes artists’ lofts and middle-income apartments, is among the developments before the Planning Board.)

But for every step forward, Aymar-Blair and others involved with the Beacon People’s Committee worry that elsewhere zoning variances are hastily being granted and parking requirements waived.

“We have this sense that things are being executed dutifully and in the interest of the public,” Aymar-Blair says. “But once the concrete is poured, you see something else and you ask — ‘What else is going on?’ “

5 thoughts on “‘How Could This Happen?’”