With its first summer outdoor movie screening approaching on Saturday, June 24 — a showing at dusk of Stand by Me — the nonprofit Cold Spring Film Society is gearing up to break attendance records once again at Dockside Park. At least three of the screenings last summer attracted more than 1,000 people each.

The screenings, which include Double Indemnity (July 8), Rushmore (July 22), Psycho (Aug. 5), The Italian Job (Aug. 19) and Song of the Sea and Moby Dick (Sept. 2), begin as soon as it’s dark enough to see the picture clearly. Admission is free, but donations are welcome at the showing or online at coldspringfilm.org (a $20 membership gets you free popcorn throughout the season).

The funds pay for the licensing of the films, equipment upkeep and stipends for five high school students who assist with set up, publicity and operations.

Two other organizations are also showing free outdoor films over the summer. The Beacon Visitors’ Center at South and Main screens a movie each Wednesday at dusk; the next showing, on June 21, will be Sherlock Holmes, the 2009 film starring Robert Downey Jr.

In Poughkeepsie, Walkway Over the Hudson will begin showing films at Upper Landing Park on Saturday, June 24, with a screening at sundown of Raiders of the Lost Ark, following a 7 p.m. concert by Murali Coryell. Parking is available at the Children’s Museum.

Candy, popcorn and lemonade are available for sale. Dogs are welcome as long as they are leashed and owners clean up after them.

Hali Traina, a Haldane High School student who spent the past few months working with the society as part of her senior internship, has analyzed the results of 93 surveys returned by audience members at an August 2016 screening.

None of this surprises Jen Zwarich, one of CSFS’s founders.

“There’s an experiential component to watching a film together, outdoors, that you can’t get elsewhere,” she says. “For-profit theaters are trying to figure out how to get people away from their couch, but it’s so different to see something with an audience.”

The increase in audience sizes has led to a larger screen, improved sound system, and soon, after this year’s fundraiser, a rig to move all the equipment in and out at once. This will allow for screenings at other locations besides Dockside, such as the Haldane football field. 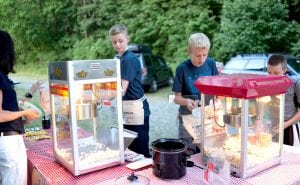 This summer’s movies were chosen after much deliberation by the CSFS board. “We always open with a general appeal film,” Zwarich says. “Though it’s not a Jaws or Jurassic Park [both shown in previous years], Stand by Me does have suspense, though it’s more mellow.”

Based on a Stephen King story set in 1959, four boys set out in search of a dead body that one boy overhears his brother talking about. Their adventures en route are colored by the personal pressures brought to bear on them by the adult world.

Here are Zwarich’s comments on the other films in this year’s series:

“This kind of noir classic, with Barbara Stanwyck, Fred MacMurray and Edward G. Robinson, always draws a large audience. In fact, groups use it as a meet-up.”

A 1998 comedy-drama about an eccentric teenager, his friendship with industrialist Herman Blume, and their mutual love for an elementary school teacher. “We’re always trying to attract youth and teens. Rushmore has perennially been requested by our summer interns who weren’t old enough to have experienced it when it was first released.” 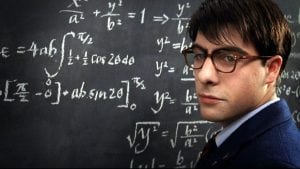 A scene from Rushmore.

The 1960 Hitchcock shocker somehow made it through the censors of the day. Motels and showers will never seem the same. “We’ve been trying to screen this since season one, but it never quite fit in before. It’s the original stalker horror film and seeing it outside makes it an entirely new experience.”

This 1969 movie about a Cockney criminal and a plan to steal a gold shipment on the streets of Turin by creating a traffic jam features a score by Quincy Jones. “This is a really fun comedy caper starring Michael Caine from the ’60s, famous for its catchphrases. It has a cliffhanger ending — not divulging more than that — which audiences can debate.”

Sept. 2: Song of the Sea and Moby Dick

“As usual, our double features allow parents time to either bring their child home in between screenings, or have them stay and maybe fall asleep or stay awake and enjoy the second movie,” which is for adults and older children.

Song of the Sea follows the story of a 10-year-old Irish boy who discovers that his mute sister, whom he blames for the apparent death of his mother, is a “selkie” (mythological creatures who live as seals in the sea and humans on land)who has to free creatures from the Celtic goddess Macha. Moby Dick, directed by John Huston from a screenplay he wrote with Ray Bradbury, and starring Gregory Peck, “is recently restored and it’s perfect for an outside, end-of-summer experience.”