Beacon High School will hold its annual graduation ceremonies at 9 a.m. on Saturday, June 24, at Dutchess Stadium in Wappingers Falls. 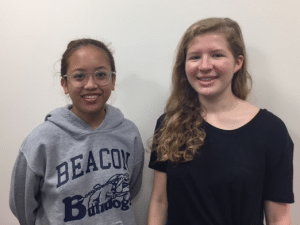 Brinas will attend UCLA, where she will study the social sciences. Her artwork has been shown in several local galleries and she was recently recognized by the state Scholastic Art & Writing Awards with three gold and four silver keys.

Through high school, Brinas was a member of the youth ballet at the Hudson River Performing Arts Center in Fishkill and took part in its annual fall ballet production since she was a kindergartener at Glenham Elementary. In May, she played the Fairy Godmother in Cinderella, The Ballet.

Brinas, who also excelled at mathematics, volunteered with the New York City Marathon and Project Linus and is a vegan activist.

Lewis will attend the University at Buffalo to study mechanical engineering.

As a member of the Beacon Players, she was the stage manager for the club during her junior and senior years, managing five shows, including Peter Pan and The Who’s Tommy. She also participated in band for four years as a flutist. Lewis also took ballet and modern dance classes for 10 years at Ballet Arts Studio and performed with the Duchess Dance Company during her sophomore year.

DiGregorio studied culinary arts/restaurant management at the Career and Technical Institute at Dutchess BOCES, where she was a member of the National Technical Honor Society.