Beacon chef cooks on Mondays — but no one pays

Nicholas Leiss works two gigs in Beacon that are a block apart and, at first glance, couldn’t be more different.

Five days a week, Leiss is the executive chef at the Beacon Hotel, serving up morel mushrooms, foraged greens, ribeye steaks with a Middle Eastern carrot puree and, for adventurous diners, parts of the pig most of us can’t envision on a plate (ears, heart).

But today Leiss is ladling piles of old-school Sunday gravy on a tray of eggplant parmigiana at the Tabernacle of Christ Church at 483 Main St. He’s paid considerably less ($0) than at the Beacon Hotel at 434 Main, and the diners pay considerably less, as well (also $0). That’s because each Monday, Leiss volunteers at the Beacon Community Kitchen, which opened 18 months ago at the church and serves lunch four days a week. 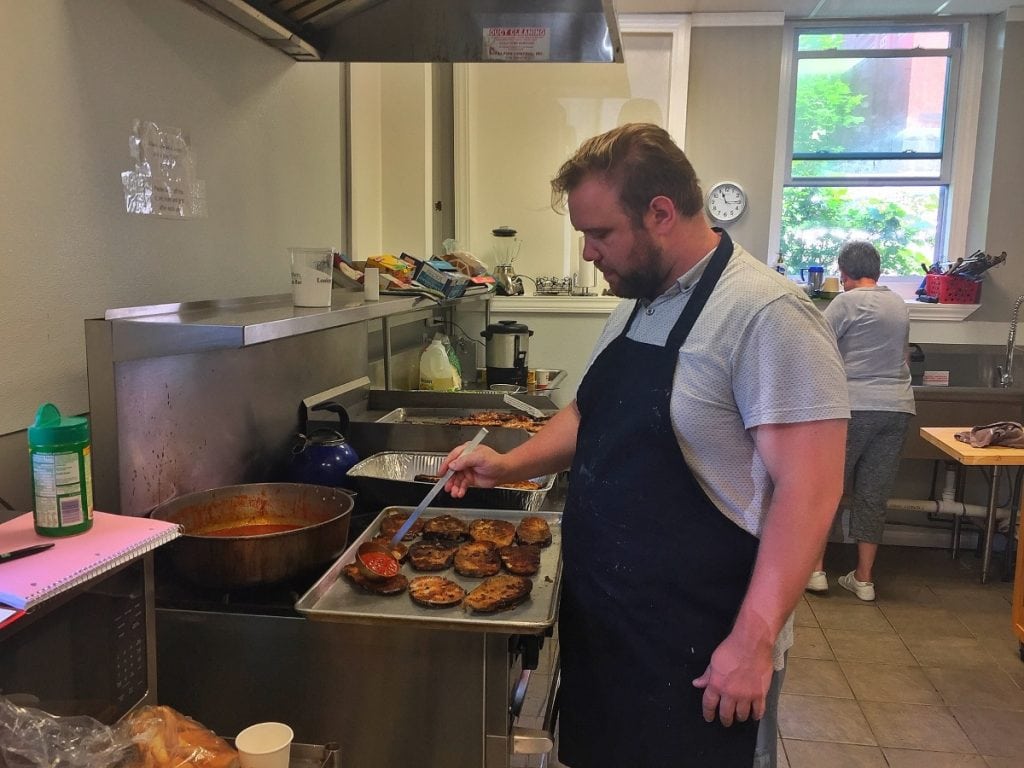 Nicholas Leiss, executive chef at the Beacon Hotel, tops off eggplant parmigiana while volunteering at the Beacon Community Kitchen. (Photo by B. Cronin)

Leiss’ game plan in both locations is similar: Use what’s available, honor the ingredients, keep it simple, bring people together over food, and make sure everyone leaves happy.

“This puts a smile on people’s faces and gives them something to look forward to,” he explains. “I like to see people happy.”

Leiss volunteered at the kitchen for the first time on the day before Christmas Eve 2015. He says he had been though a bad breakup and was looking for something constructive to do. He figured it would be a one-time gig. But in the weeks that followed he couldn’t stop thinking about how much he had enjoyed the work, so he signed up to cook once a week.

Leiss plans his soup-kitchen menu a month in advance with Candi Rivera, the head of the program, so little goes to waste. However, Leiss must be prepared to throw out his plan at a moment’s notice if a food donation comes through the door. “If I walk in prepared to make ham steaks, and Candi says that we need to make tuna melts, that’s what we’re making,” he says.

Leiss maintains the same flexibility at the hotel. “I try to source everything within 60 miles,” he says. “It’s hard, especially now when the weather has been so cool that the growing season had a late start. But I want to support my farmers, my friends and my neighbors who are growing things — people who I know are passionate about what they’re doing.”

The Beacon Community Kitchen, located at 483 Main St., serves free lunches from 10:30 a.m. to noon, Monday to Thursday. To volunteer, visit signup.com or email Candi Rivera at [email protected] Donations may be sent to P.O. Box 368, Glenham, NY 12527 (payable to Incareof with “Beacon Community Kitchen” on the subject line).

Even when the menu gets exotic, it’s typically a reflection of a desire to be thrifty and use every part of the animal. He fondly recalls eating pig heart, stuffed with rice, growing up in rural Pennsylvania. “If I get a whole animal, I need to use that whole animal” he says. “It gave its whole life to sustain you, so you need to sustain yourself with the whole animal.”

For those who aren’t ready to embrace offal, Leiss offers another option at the Beacon Hotel: Family friendly fare in the early part of the week at a fixed price. Like Tuesday Night Ramen at the Roundhouse and Monday fried chicken at Kitchen Sink, Leiss on Monday nights serves three courses of rustic food such as chicken cacciatore and polenta for $25. He says it gives his staff a chance to relax and not worry about the full menu and his customers a chance to relax after a hectic weekend.

“It used to be that growing up, you’d all go over to your grandmother’s house for a big Sunday dinner and you’d just sit there and converse and enjoy each other’s company,” he said. “That’s what I’d like to do here. Come in, relax, eat some pasta and spend time with your family.”