The biennial Women’s Softball European Championship, which will be held June 25 to July 1 in Bollate, Italy, will feature 23 teams — and four Haldane grads.

The women have been training together with Nick Lisikatos, Haldane’s coach (and Chelsea and Samantha’s father), before their departure. The Lisikatos left Cold Spring for Italy on June 17 and the Monteleones on June 22.

The Greek and Irish teams play each other at 9:30 a.m. (3:30 a.m. EST) on Monday, June 26. Starting June 29, the championship rounds will be livestreamed at flosoftball.com. 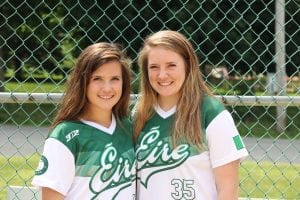 Hannah and Allie Monteleone will play for the Irish national team. (Photo by Michael Turton)

Last year, when the Lisikatos sisters were playing for the Greek national team in the World Championships in Surrey, British Columbia, Nick Lisikatos told an Irish coach about the Monteleones; Allie had played for him and Hannah was entering her senior season. Video clips of the women hitting and fielding sealed the deal.

This is the first season that dual citizens have been allowed to play for the Irish team, which has five Americans. The Monteleones’ maternal grandparents were natives of Donegal; the sisters say they have counted 89 cousins in Ireland. They will meet their teammates in Italy, practice for two days and scrimmage against England before the tournament begins.

Allie Monteleone played soccer, basketball and softball for Haldane and is a guard for the Pace University basketball team; Hannah also was a standout in all three sports and will play soccer for Pace in the fall.

The Lisikatos sisters, along with Alexis Bazos of Pound Ridge, an outfielder who plays for Notre Dame, are among 13 Americans on the 16-member Greek team.

Chelsea Lisikatos, 23, plays first and third base and pitches, and Samantha, 21, is a utility player but mostly plays right field. Their dual citizenship originates with their great-grandparents, who were from the town of Leonidio, in the Peloponnese. 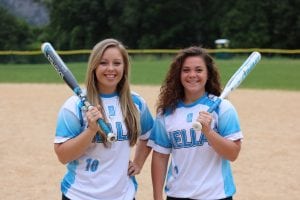 Chelsea and Samantha Lisikatos will play for the Greek national team. (Photo by Michael Turton)

For Chelsea, the journey began when she made a 10-and-under softball team in Cold Spring as a pitcher. She later played six years on the varsity squad at Haldane, then four seasons as a scholarship player for the University of North Carolina at Charlotte, starting all 51 games for the 49ers at third base as a senior.

In one game, she hit a home run off a pitcher who also played for the Greeks, which caught the national team’s attention. A week after the season ended, she was offered a chance to play at the 2015 European championships.

The next year, the team invited Samantha, then a sophomore at SUNY Oneonta, to join the team. The sisters played in 2016 at the World Championships in British Columbia, where the Greek squad finished 19th of 31 teams. Chelsea batted .348 with three RBI. Sam batted .261 with six hits and two stolen bases.

“My grandmother always pushed us to find our culture,” Chelsea says of her decision to play for the Greek team, which had folded after the 2004 Olympics but was revived in 2015. “For my dad, seeing us represent the jersey, the flag of his blood, is such an honor. My grandmother cries seeing us in the uniforms. For them, we are representing villages and people. They took down the town flag [in Leonidio] to give it to us.”

The championships last year in Canada were a great experience, the sisters say. “I am sitting there with girls from Israel,” said Chelsea, “dancing with Team India and giving extra gear to Team Uganda. Sam got her hair braided by Team Kenya.”

“Those moments all started with a little bit of softball,” Chelsea adds. “Connecting with these women and holding clinics [for local girls, which they will do again in Italy] gave us the opportunity to share our culture and unite us as strong female athletes, and grow this beloved sport.”

Funding is an issue for both teams, especially in cash-strapped Greece. The Lisikatos sisters raised $2,250 online to help pay for their flights, hotels and equipment, while the Irish national team has done its own fundraising.

The goal for both squads is to be among the six teams worldwide to compete at the 2020 summer Olympics in Japan, which will feature softball for the first time since 2008. The perennial powerhouses since the first European Championship in 1979 have been Italy, the Netherlands and the Czech Republic, although the Greeks finished second in 2005 and 10th (of 20 teams) teams in 2015. The Irish were 19th.