Susan Goodier, author of No Votes for Women: The New York State Anti-Suffrage Movement and co-author of the forthcoming Women Will Vote: Winning Suffrage in New York State, will speak at 6:30 p.m. on Thursday, June 29, at the Desmond-Fish Library in Garrison on the suffrage and anti-suffrage movements as seen through political cartoons. 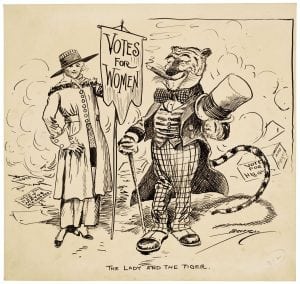 A cartoon depicts the big winners on election day in New York in 1917 — women’s suffrage and the Tammany Hall political machine, represented by the Tammany Tiger. (National Archives)