A contract proposed by Cold Spring would require Nelsonville to pay $44,824. Nelsonville offered $41,500, which Cold Spring rejected.  “We are not accepting a partial payment,” Merandy said.

Merandy described the counteroffer as “puzzling, at best,” given that Cold Spring has provided fire protection since Nelsonville disbanded its own department. 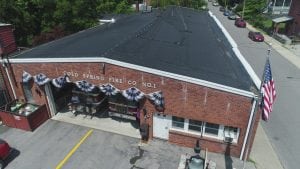 The Cold Spring firehouse roof is in need of repair. (Photo by Dave Lant)

In a letter that accompanied Nelsonville’s alternative plan, Mayor Bill O’Neill said that agreeing to a provision that required payments to be “evaluated and adjusted each year” would be “fiscally irresponsible” on the part of the Nelsonville board.

Merandy said that Nelsonville objected to paying a portion of CSFC’s workers’ compensation and pension costs. O’Neill wrote that the Nelsonville board may call for a referendum in 2018 to determine if residents support paying part of those costs.

“When this referendum is completed we may be in a position to establish a longer term agreement,” he wrote.

The CSFC budget each year is used to determine how much money is contributed by Nelsonville and Philipstown, which relies on the fire department for coverage of some areas. In the past, Cold Spring has billed Nelsonville while the fire company has dealt directly with the Town of Philipstown, Merandy said. He termed the practice unlawful. All billing he said, will now be done through the Cold Spring Village Board.

Deputy Mayor Marie Early added that billing for fire protection is based on the taxable assessed valuation of property in the areas served by CSFC, as calculated by Putnam County.

Merandy said billing provides a “fair distribution of fire company costs,” a formula that does not charge Philipstown or Nelsonville for such CSFC expenses as utilities, fuel for vehicles, maintenance and capital improvements. He challenged a comment by former Nelsonville mayor Tom Corless several weeks ago that Nelsonville’s fire protection bill had become a source of cash for Cold Spring. “We’re not making money on it,” Merandy said.

In his letter O’Neill said he is willing to continue discussions.

A week earlier, several members of the CSFC attended a Village Board meeting to discuss ongoing needs at the Main Street firehouse.

Merandy said that $75,000 had been taken out of the year-end fund balance for roof repairs. The village expects to issue a request for proposals in July. The leaky roof has been an issue for some time and Merandy apologized for not moving ahead with the repairs more quickly. “We’re kind of overwhelmed here, to tell you the truth,” he said.

CSFC had also asked the Village Board to fund temporary air conditioning units for July and August, especially during its 15th annual Junior Firefighters Academy. “We can’t approve temporary AC units for two months,” Merandy said. “We don’t have it in the budget.”

He added that because it is early in the new budget year, which began June 1, it is more difficult to reallocate funds. “I can’t find the money; I can’t find it for other items, either,” he said. Merandy said that in the next budget cycle items at the firehouse, including a new boiler and possible repairs to the floor, would have to be addressed.

Communications have been strained lately between the board and CSFC. During 2017-18 budget preparations, the board asked CSFC for its spending “actuals” a number of times, but the fire company did not respond. On the other hand, correspondence from CSFC to the village has at times apparently been misplaced.