Metro-North says it can tear up concrete

As part of its Looking Swell campaign, which raised about $200,000, the Philipstown Depot Theatre replaced its 67 seats and renovated its backstage. The last phase of the overhaul was replacing 4,500 square feet of broken and uneven concrete between the theater and the Metro-North tracks and add drainage, new lampposts and outdoor seating.

There was one complication: The railroad owns the land up to the theater’s entrance (including a few feet under its alcove), as it does property on either side of the tracks along the Hudson and its other lines.

On June 23, the MTA Board approved a licensing agreement with the nonprofit theater to allow it to upgrade the space, which will cost about $60,000. The agreement is for five years, with two five-year renewals, and the theater will send the railroad a small lease payment. 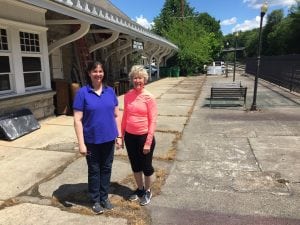 Executive Director Amy Dul and Artistic Director Nancy Swann of the Philipstown Depot Theatre stand on the patio that the nonprofit plans to transform with new concrete, lighting and seating. (Photo by C. Rowe)

“Metro-North gave us a very generous rate in recognition of fact that we’re putting $60,000 into the renovation, and it will clean up a little bit of a liability for them and turn an eyesore into a vibrant meeting place,” said Steve Ives, chairman of the theater board.

The theater had only about $15,000 left from its campaign for the patio rehab before an anonymous donor stepped forward with the remaining $45,000, Ives said. Several Metro-North departments need to sign off on the plans, he said, but the theater hopes to begin the project in October.

Built in 1892, the depot served train riders until shortly before it was sold in 1962 to the Garrison Landing Association, which has been leasing the building to the theater since 1996.

The next project for the theater, Ives said, is to find permanent storage for its scenic shop and costumes. The costumes are now at the Philipstown Recreation Department and the scenic shop in donated space at Winter Hill in Garrison.

4 thoughts on “Depot Theatre Gets Approval for Patio Rehab”