Tim Dexter, who has been Beacon’s building inspector since 1994, wears multiple hats, including fire inspector, plumbing inspector, code enforcement officer, flood plain administrator and zoning administrator. He spoke with The Current about planning, infrastructure and development. His responses have been edited for brevity. 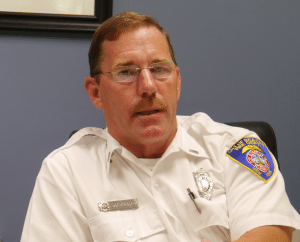 Can you explain the functions of the Planning and Zoning boards?

The Planning Board administers zoning regulations. It doesn’t have a whole lot of discretion. The Zoning Board of Appeals is a relief valve. When a community adopts zoning, it can’t possibly think of every scenario and every property, so the zoning board grants variances.

You have developed a presentation about Beacon’s revitalization. What do you say?

I talk about how we had to break down the good-old-boy system and give the building inspector enforcement tools. Beacon was a horrible place — and I was born and bred here — and full of illegal housing units. Storefronts had been converted to apartments. The city would approve any project that came along. Now, after changing some of the zoning, we’re in a more comfortable position, but Beacon still has to stay sharp.

What do you think of the pace of development in Beacon?

In 2007, the community had a vision that went into the comprehensive plan. Zoning laws were adopted to implement the plan. Now we’re seeing that play out and people are saying it’s horrible. Is it? This is what the community wanted. You make tough decisions, you adopt laws and you back the people empowered to carry out the laws. When elected officials start to waver on that, that gives me concern.

People who own land are entitled to develop it, in accordance with the zoning set forth by the comprehensive plan. The naysayers have no idea of the amount of planning behind the scenes. Will there be more traffic? Will parking be more difficult? Sure, but the city has plans. They’re talking about how we’re going to manage parking. We’re looking at additional sources of water, even though our water studies show we can support 19,000 people. [Beacon’s population is about 14,000.]

How do cities measure what their infrastructure can sustain?

It makes sense to build where there’s [already] infrastructure. All the pipes in the ground, sewer or water, have to be replaced, and if there’s more people to help pay that cost, that’s where I want to be. Beacon should measure its growth in a thoughtful, carefully planned way, and I feel very confident that the city is on track.

Is there a finish line in sight?

Is there a saturation point where we can’t develop any more? You’ll know that through the review process. The fire chief is going to say, “I’m operating at max capacity,” or the schools will say they’re bursting at the seams. We know our sewer plant was designed for 6 million gallons a day and we’re at 3 million gallons now. All that stuff is analyzed.

Does growth in cities tend to be cyclical?

Sure. Look at Beacon. In the 1950s we were hot, and then we started to cool down in the ’70s. In the 1980s we were ice cold but now we’re on fire. The secret is to keep your edge, so you slow the cycle down. The mayor is doing that with the comp plan. From 2007 to 2017 a lot had changed, so it was time to refresh the numbers and see if that’s where the community still wants to go.

What do you think Beacon will look like in 10 years?

I don’t think there will be a huge population jump. If we get to 18,000 or 19,000 people, I don’t think that’s horrible, if the city stays sharp. You have to stay on top of your code enforcement.

I see it not much different than it is today, except the building you see going on will be completed. I see Beacon flourishing with restaurants and places to go out. With the money that the tax base will bring in, I see the infrastructure being brought up to where it needs to be. I see Beacon being as good a place to live as it is today.

What should people do if they are unhappy about the changes?

Come to public hearings. That’s the time to speak out. If you’re open-minded and your intentions are genuine, the mayor is always looking for volunteers for zoning boards or planning boards or other committees. That’s a way to be positive and productive.

One thought on “Sticking to the Plan”