In October, The Current profiled newly hired Haldane fifth-grade teacher Kristen Spooner. A former lawyer, she had previously taught for eight years at a high school in the Bronx. We checked in with Spooner in February to see how the year was going and visited with her most recently as the school year came to a close.

Unlike the 60 or so fifth-graders she hung out with this year, Spooner won’t be moving on to middle school. Instead, in the fall she and her two colleagues who teach fifth grade will be back in their second-floor classrooms at Haldane Elementary with a new group of former fourth-graders.

A few weeks before the end of the year, Spooner already sounded wistful about the end of class. 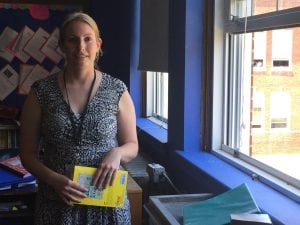 Kristen Spooner in her classroom near the end of her first year teaching at Haldane Elementary (Photo by A. Rooney)

“The kids are ready to move on,” she says. “They were such babies when they came in, but now they have the desire to become more autonomous. It’s there in the little things, like taking ownership of their cubbies, and the bigger things, like not constantly raising their hands asking for permission to do everything.”

The structure of fifth grade at Haldane, in which students shift rooms and teachers during the day, contributes to this sense of independence, she says, “despite the organizational challenges it brings up for some kids.”

Spooner faced some challenges of her own. “This was my first time with the curriculum, and I definitely had some pacing issues and had to do a bit of catch-up, but that’s all part of the process,” she says. “It was a nerve-wracking at times, but I was able to circle back later in the year.”

She said the support from parents were “over-the-top amazing” — from buying books for the classroom to PTA events such as Teacher Appreciation Week, “which I didn’t know actually existed.”

Spooner lives in Cold Spring with her husband, Ben, a 1998 Haldane grad, and their two preschool sons. “I was a little nervous at first about living in the same place as teaching,” she says, “but it hasn’t been challenging at all. From experiencing Parrott Street at Halloween to getting ‘flocked’ [waking up to find 30 plastic pink flamingos on her lawn as part of a varsity softball fundraiser], it’s all been good. No one has caught me or beat me up at Foodtown about anything just yet.”

Spooner says she was most surprised by similarities between Haldane students and those she taught elsewhere. “I naively assumed I wouldn’t encounter certain behaviors here,” she says. “It’s been a learning experience to see that kids are kids despite the socio-economics involved.”

She says the resignation of Elementary Principal Brent Harrington, who will leave on June 30 to take a job in Sleepy Hollow, was “tough news” for her. “He has been truly supportive,” she says. “The unknown is always a little unnerving. I never experienced an administrative change in all the time at my school in the Bronx, but I’m sure whoever they hire will be great.” (On June 21, Haldane hired David Wallick, most recently with the Middle Country Central School District on Long Island, to succeed Harrington.)

Over the summer, Spooner will be joining a number of other Haldane faculty at a project-based learning conference in St. Louis and enjoying some R&R — or as much as possible while she and her husband take trips in a small camper with 2- and 4-year-old boys. In the fall, their older son will start kindergarten at Haldane.

If Spooner could provide advice for other first-year elementary teachers, it would be to preserve their sense of humor (including laughing at yourself) and to be flexible about plans and expectations. She said she would be pleased if her students felt the class had challenged them. “They all have learned, but I hope it went beyond that — my expectations are high,” she says. “I hope they feel that my class had something for everyone. Everyone has an aptitude for different things, and it’s great to see kids run with something which inspires them.

“These kids have really touched me,” Spooner says of her fifth-graders. “I’ll miss them, and hope they pop in to say hello in the fall — plus, I plan on helping with basketball, so I’ll see some of them again through that.” Spooner wrote each of her students an end-of-year card, which is something she did in the Bronx, as well.