A midlife career change may seem daunting, but even after age 50 you may still have 15 to 20 years before retirement. In one survey of 2,000 older Americans, 82 percent said they had changed not only jobs but careers after age 45. Among the most common paths are teaching and nursing, with 55 percent of nurses in the U.S. now over age 50.

That has been the route for a number of Highlands residents, including Dorothy Carlton of Cold Spring, who owned a salon for nearly 30 years until, at age 53, she graduated last year with a bachelor’s degree in nursing from Mount Saint Mary College. Now an RN at St. Luke’s Hospital in Cornwall, she works the midnight shift on a surgical floor. Her responses have been edited for brevity. 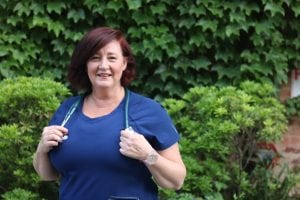 What inspired you to change careers?

My interest in nursing goes back to the birth of my first child 19 years ago. During labor and delivery, I saw the vital role that nurses play; it was so important to have someone who was on your side, supporting you, making sure you had what you needed. I wanted to be an advocate for women. It was a distant but untouchable dream for many years because I had small children.

What was it like being older than the other students?

They were all kids in their early 20s. I don’t think the age difference mattered but if I walked into a room and the other students didn’t know me they thought I was the instructor. They had questions for me!

Was college difficult after being away from the books for so long?

I was terrified at first. I didn’t think that my brain had the capacity to retain the information. I didn’t know if I had the ability to learn on the level I needed. But statistically, older students do better because we are focused. We want this; failure is not an option.

What went through your mind your first day as an RN?

Am I going to remember anything I learned in school? Am I going to be able to do this job? But they bring you in gently. And it was exciting: “I’m finally here. This is what I’ve worked for all this time.”

Better than I expected. I’m not as tired waking up in the evening as opposed to 5 a.m. I feel I need less sleep between shifts. It’s quieter, but not less busy.

Is it a big adjustment for your two sons?

Julian is 19, so he’s fine. Alex is 14 and stays with his father when I work. He misses me but he likes to call me and order his breakfast or lunch to be brought to his school on my way home!

What has been your scariest moment?

When a patient goes into crisis, you call a “Rapid Response” to head a “Code Blue” off at the pass. About 10 people come into the room, sometimes within seconds. I made the call — now I have to give the doctors all the information so they can assess the situation — and you don’t have the paperwork in your hand. It’s scary; it’s a lot of stress.

What’s been your biggest reward?

As a hairdresser you’re a freelancer and you constantly have to go after the work; it never changes. Nursing is a great job with benefits and security. My sense of accomplishment, though, is more about achieving my goal. I never liked science yet now have a bachelor’s degree. It’s remarkable. And it’s very nice to have a steady job.

Do most patients appreciate your work?

Some patients don’t understand how much we do on the front lines. But a lot of people appreciate it; they get how hard we work. It’s about half and half.

Have doctors treated you differently than the younger grads?

They probably expect more because nobody knows I’m new. But I tell them right off the bat. “I’m new – so tell me what you need and I’ll give it to you.” My maturity is an advantage, as are my life skills.

What would you say to a 40-something who is thinking about doing what you did?

You’re never too old. I plan on getting a master’s degree, become a nurse practitioner and earn a doctorate in nursing. It’s not just about wanting to help people. Are you capable of helping people? That’s the big thing.

2 thoughts on “From Hair to Health Care”