In early June, poisonous snakes thought to be northern copperheads bit two hikers in separate incidents on trails in the Hudson Highlands.

Jesse Jaycox, a biologist with the New York State Office of Parks, Recreation and Historic Preservation, said the first victim, a male in his 20s, was bitten while hiking the Appalachian Trail near Canopus Lake in Fahnestock State Park. He was flown by helicopter to NYC Health + Hospitals/Jacobi in the Bronx for treatment.

The second victim, also a male, was bitten while hiking at Breakneck Ridge in Hudson Highlands State Park and treated at Vassar Brothers Medical Center in Poughkeepsie.

And it isn’t just hikers who should to be wary.

Last September, 13-year-old Colin August was bitten by a copperhead while he and a friend searched for crickets as part of a school science project near his home in Garrison. His father, Todd, took Colin to New York-Presbyterian Hudson Valley Hospital in Peekskill; from there, he was transferred to NYC Health + Hospital/Jacobi by ambulance. He spent three days in the pediatric intensive care unit there and received two doses of antivenin as part of his treatment, said his mother, Kym.

Learn to identify local poisonous snakes:
Timber Rattlesnakes are variable in color, ranging from yellow to black overall. Dark brown or black cross-bands are present along the length of the body. The tail has a rattle. 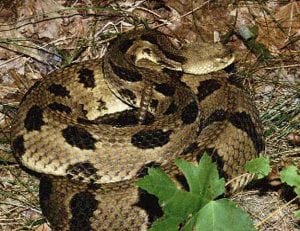 Copperheads are orange-red to grayish-brown in color with a distinctively colored orange to reddish head. The head is not patterned. The body has a series of brown hourglass-shaped cross-bands along its length. Bands are wider at the sides than at the top. 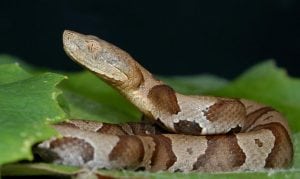 Pay close attention to your surroundings.
Stay on marked trails.
Keep pets leashed; avoid any snakes they encounter.
Call 911 right away if a bite occurs.
Most bites are to the limbs; keep the affected area level with the heart.
Remove tight-fitting clothing in the wound area.

Do not try to suck out the venom.
Do not cut out flesh around the bite.
Do not apply tourniquets, ice water or electric shocks.
Do not use commercial snakebite kits that suggest making lacerations in the area of the bite, applying suction or tourniquets.
Do not kill the snake or move closer to it to take an identifying photograph.

According to the SUNY College of Environmental Science and Forestry, only three of the 17 snakes native to New York state are poisonous: the northern copperhead and timber rattlesnake, found mainly in the lower Hudson Valley and the Catskills and the massasauga rattlesnake, found in the Syracuse-Rochester area.

Jaycox said no statistics are available but that snake bites in recent decades have been rare. He added that the cool wet weather followed by warm sunny days at the time of the June incidents might have caused snakes to be more active.

Eric Lind, director of the Audubon Center and Sanctuary in Garrison, agreed, saying that although copperheads are occasionally seen locally, bites are “highly uncommon.” He said copperheads are more numerous and widespread than timber rattlers and are more likely to be encountered. 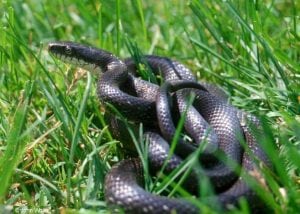 Misidentification can cause people to panic, sometimes resulting in injury or death for the snake, even though it may be harmless. Lind said that milk, northern water and young black rat snakes, all found in the Highlands, have skin patterns similar to those of copperheads.

He encourages people to be aware of the species and their appearance. “Take the time to learn about [snakes] and any accompanying risk,” he said. “Never try to handle a snake of any kind. Common sense and preparation can go a long way toward prevention.” 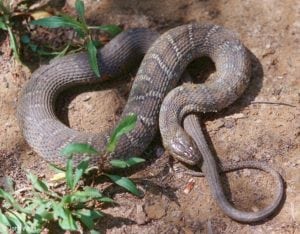 Jaycox said that mistaken identity accounts for the majority of venomous snake reports, in part because some non-venomous species vibrate their tails rapidly when alarmed and are incorrectly identified as rattlesnakes.

NYC Health + Hospitals/Jacobi is a leading center for treatment of poisonous snakebites in the northeastern United States. Dr. Joshua Silverberg, associate director of the Snakebite Treatment Team there, said the antivenin CroFab is typically used in treating bites from copperheads and timber rattlesnakes, both of which are classified as pit vipers. 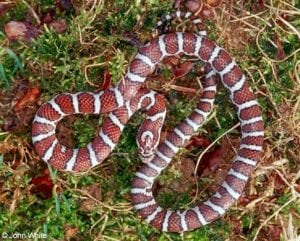 When someone is bitten by an exotic species, Silverberg said, the nearby Bronx Zoo, which has an extensive collection of exotic poisonous snakes, provides antivenin. The hospital is not allowed to stock antivenin for exotic species.

The Upstate New York Poison Center makes antivenin available to a number of hospitals in the 54 counties over which it has jurisdiction, including Putnam and Dutchess.

The SUNY College of Environmental Science and Forestry advises that while bites from venomous snakes native to the Hudson Valley rarely prove fatal to healthy adults, medical attention should always be sought immediately. It describes bites from non-venomous snakes as “generally inconsequential” but recommends that victims ensure that they have an up-to-date tetanus shot.