Rand Scholet, founder and president of the Alexander Hamilton Awareness Society, will speak at 7 p.m. on Thursday, July 13, at the Tompkins Corners Cultural Center in Putnam Valley about Hamilton’s influence on George Washington. 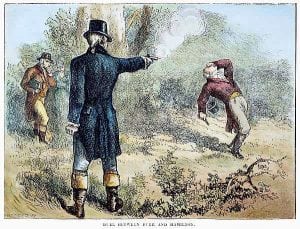 Aaron Burr and former Treasury Secretary Alexander Hamilton ran against each other for president in 1800. Four years later, Burr, then vice president, killed Hamilton in a duel. (Saturday Evening Post)

Hamilton was an artillery commander and senior aide to Gen. Washington during the Revolution, and afterward a congressman from New York, promoter of the U.S. Constitution, treasury secretary, and creator of the nation’s financial system, the Federalist Party, the Bank of New York, and the U.S. Coast Guard (not to mention the New York Post).

The program, which is presented by the Putnam Valley Historical Society, will include a re-enactment of the infamous duel between Hamilton and Vice President Aaron Burr.