When his toddler son suffered allergic-type reactions to all the store-bought soaps used to bathe him, Gary Austin took matters into his own hands. Austin, then an Adirondacks-based, living-on-the-land, baking-bread-in-a-wood-stove kind of guy, with a pastry chef background, hit the library, determined to learn how to make non-allergenic soaps in a unique way.  After multiple attempts, he developed an olive oil soap for the 2-year-old, making a big batch which lasted a year.

This proved to be the genesis for what is now, 35 years later, a successful, thriving business, SallyeAnder. It’s been family-run, by Austin, his wife Karen and two of their four children, but it is his daughter, Sallie Austin Gonzales, who is largely heading things up now. Three years ago, the four, along with other family members, moved downstate, and began manufacturing the soaps in a Beacon factory. Now they have increased their public presence in Beacon with the June 17 grand opening of their first retail store, located in the One East Main complex. 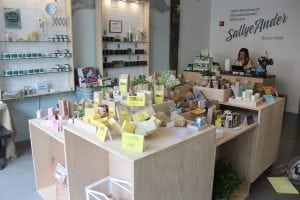 All of the SallyeAnder product lines are found in their retail shop.  (Photo by A. Rooney)

All of the soaps use olive oil or soy as their base, and never use coconut or palm oils, parabens, alcohols or sodium laurel sulfates. There are no artificial dyes or foaming agents, and the soaps are never tested on animals. Gonzales says they each tend to last for two or three months of showering. 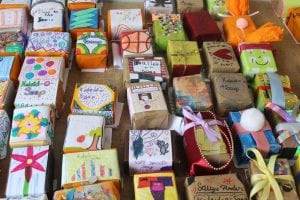 A decorate the soap label contest for kids attracted lots of entries, from Beacon, Cold Spring and beyond. (Photo by A. Rooney)

Since the beginning, the focus has been on eliminating artificial chemicals and synthetic ingredients, and instead substituting essential oils and edible ingredients through a hot and cold combination process. This, says Gonzales, translates into soaps which last up to five times longer than their grocery store kin. Most manufacturing, design, packaging and shipping is still done by hand. Only the milling, in which the components are broken down, mixed, put together and shaped, once done manually, is now done by machine — a necessity with their vastly increased volume.

“We’ve been so successful simply because of the quality of the product.  People become very loyal,” Gonzales says, attributing it to her father’s background: “Because he had been a pastry chef, he had a real knowledge of how to combine chemicals. Nothing is useless and everything is included for a reason in our soaps — though of course you don’t need to have an issue with your skin in order to appreciate them.” 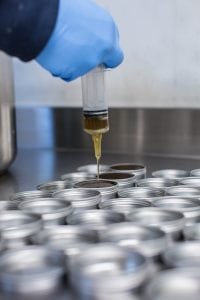 SallyeAnder formulates its products by hand, at its Beacon factory. (Photo provided)

The business didn’t really begin as one. Early on, the Austins brought their soaps to various farmers markets in nearby places like Rochester and Oswego, and continually sold out. Karen Austin shifted into the role of saleswoman, bringing the soaps to crafts fairs and hosting endless house parties. It was soon apparent that they had a nascent business, and in fact the application for the LLC licensing was done so quickly that Gary Austin unexpectedly had to come up with a name for the company, without time to really consider it. He used his grandmother’s nickname, not realizing how difficult it would be to spell. They’ve thought since of changing it, but there’s too much brand loyalty already developed to do so. Eventually the craft shows led to attendance instead at trade shows, and a wholesaling business was developed.

It wasn’t always joyous growing up in a “soap household,” Gonzales says, mentioning that the business, as it does for many entrepreneurs, crept its way into the household “almost like a family member … it meant very little time for anything else — there were no gymnastics classes or anything like that; my parents had a very strong hard work ethic. And at the same time we are all very grateful and proud of what they accomplished.” Gonzales attended law school, but ended her studies to step back into the family business when her father grew ill and she saw the company was slowing down. She says she would recommend, to those families starting their own business, that, for optimal family life, they should “not talk about it all the time at home, and make sure that at least one full day each week is spent at home as a family.” 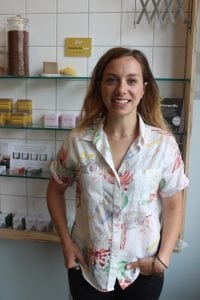 Gonzales is learning to heed her own advice, as SallyeAnder keeps growing, and she juggles running multiple sides of it with the demands of her own family, which includes two young sons. There are now over 2,000 stores, largely small boutiques, across the country, which stock SallyeAnder product lines. “There’s no slow season — but it’s a wonderful problem to have,” she says.

The move to Beacon was precipitated by the better medical care available downstate for Gary Austin. Though it was difficult for all leaving their longtime hometown of Minetto, Gonzales was excited at moving closer to New York City.  Beacon, with its mix of city and country, proved a good fit. “Beacon just felt really comfortable. Moving downstate was a big conversation, and not an easy decision, but Beacon has welcomed us with open arms. Mayor [Randy] Casale came by and introduced himself; we work with Common Ground Farm to obtain some of our ingredients; and one of our employees, Birgit Larson, painted the wonderful mural which fills the space, and the community has been really appreciative of the quality of our soaps. “ 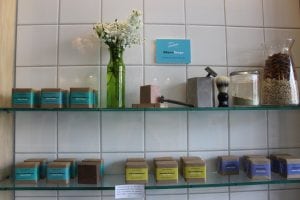 A selection of SallyeAnder shave soaps. (Photo by A. Rooney)

Although the mainstay of the business is wholesaling, Gonzales had been looking to give SallyeAnder a retail presence in Beacon; when this space presented itself, she decided to give it a go. There are now eight people employed at the manufacturing facility, which has been open for three years and is located in a Beekman Street building, and three besides Gonzales in the retail outlet; all save Gonzales (who lives with her husband and children across the river in Cornwall) are Beacon residents. Gary and Karen Austin, along with Sallie’s brother Aaron are still involved in the business as well and there are two employees still based out of Minetto, working in sales.

SallyeAnder is open daily, from 11 a.m. to 6 p.m. (sometimes 7).  Find them on sallyeander.com and social media.