Landfill option from 2014 back on table

Neighbors of a proposed cell tower near the intersection of Routes 9 and 301 brought their concerns back to the Philipstown Zoning Board of Appeals on July 10 before repeating them the following night to the Conservation Board.

They had earlier objected to the project in June. ZBA Chairman Robert Dee said the board had received 55 letters about the proposal.

The proposed tower came up at a July 6 Town Board meeting as well. As the debate continued, public officials questioned the need for the cell tower on Vineyard Road, which would be the fifth installed in Philipstown.

Homeland Towers, which would install the 180-foot structure for Verizon Wireless, says it would expand coverage in the area. Robert Gaudioso, an attorney for the project, said in June that planners do not rely on consumer complaints about dead spots but instead use a standard industry calculation to determine the number of towers needed. The tower could also provide coverage for three other wireless companies as well as accommodate Putnam County emergency services. 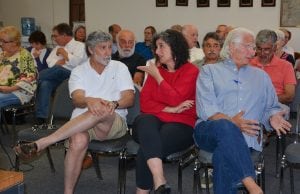 Members of the public confer with each other before the Philipstown ZBA’s July 10 discussion of the proposed cell tower. (Photo by L.S. Armstrong)

At the same time, the town’s old landfill, now partly utilized by recycling operations, has re-emerged as an alternative. In 2014, Homeland Towers asked to rent space there for a tower, but talks with the Town Board ended when residents objected. The landfill, at 59 Lane Gate Road, is about one-third of a mile from the Vineyard Road site.

During its July 10 session, the ZBA, the lead agency for reviewing the project, said it would hold a joint public hearing with the Conservation Board, which must consider the tower’s effects, if any, on wetlands and adjacent areas.

However, Dee made it clear that a hearing will not occur anytime soon. When David Kenny, a lawyer for the tower project, requested a September date, Dee said the application still contained errors first pointed out during the June ZBA Meeting and that other questions remain unanswered.

These include, he said, the potential health hazards to the occupants of a home located near the site of the proposed tower; what the tower will look like; whether the landfill is a viable location; and whether the landowner, Chris Fadden of CF Diversified Corp., could give Homeland Towers a lease on a different part of his 64-acre property that is farther from residential neighbors and closer to the Route 9 commercial corridor.

Homeland Towers must “get this stuff straight first,” Dee said. “We’re no way near a public hearing.” (A public hearing typically takes place only after all relevant local agencies evaluate a project.)

Dee also said that Homeland must “show the need” for a tower. 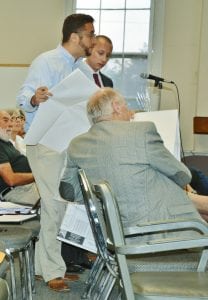 (At the July 6 Town Board meeting, Supervisor Richard Shea expressed the same sentiment, asking if another cell tower is necessary. He said Town Board members are aware of residents’ concerns and that he and Stephen Gaba, the town attorney, had spoken with Homeland Towers about alternatives. “We can still put it” at the town landfill, he said, “but I don’t think that’s going to make anybody happy,” either.)

Steve Sterling, a Lane Gate Road resident who had expressed skepticism about the 2014 tower proposal, informed the ZBA that his cell phone doesn’t function well everywhere on his property. “It doesn’t bother me,” he said. “I work around it.” Sterling predicted that if an intrusive tower goes up, for years “we’re all going to look at it. It’s a blight.”

Moreover, “the amount of heat that comes off these things is substantial,” he said. Should the town allow a large tower, “we’re never going to take away what this does to our community,” he cautioned. He thanked the ZBA “for running these gentlemen [from Homeland Towers] through their paces.” 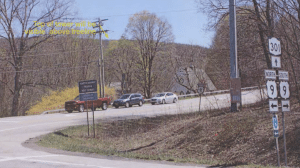 A photograph from a consultant’s report shows where the top of the tower would be visible above the treeline at the intersection of Routes 9 and 301.

Paul Eldridge, a Rockwald Road resident (and Putnam County personnel director), said the tower “will be looming over” the houses on his road.

Kerry Jordan, of White Rocks Lane, expressed fears of water runoff and the tower’s effect on a stream running through the area. “We look at this beautiful mountain valley” now, she said.

Gaudioso assured the Conservation Board on July 11 that “we’re not impacting the wetlands” or otherwise interfering with water resources.

Sterling, though, argued that a tower “does a lot of other things” to the environment besides potentially intruding on wetlands.