For $200,000, the Open Space Institute has purchased an easement on the 1-acre waterfront strip on Garrison’s Landing, turning the area into a public park and preventing it from being developed.

The ownership of the land remains with the two landing groups, but should it ever be sold or change hands, the easement would continue to restrict development and provide for public access. 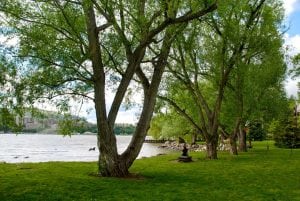 “We wanted to know more about what OSI had in mind for the land,” Karlen said of discussions by members of the two landing groups about whether to sell an easement. “They don’t want it developed  and we have no plans to develop it, and they wanted a plan for public access and we want to provide public access.”

Riverfront Park contains a gazebo, a grassy common, benches and willow trees, as well as a launch spot for kayaks and canoes and a ferry that takes cadets to and from West Point. The easement allows public access through a strip of land off Dock Street, at the northern end of the landing, and also to the Metro-North station at the southern end. 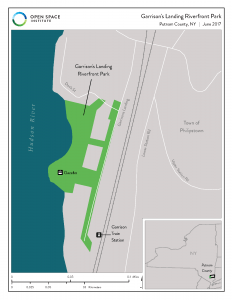 A map showing the property covered by the easement. Click to view a larger PDF version.

The waterfront area has long been the site of the Garrison Art Center’s annual Arts and Crafts Fair and offers a scenic view of the United States Military Academy. It lies adjacent to the Garrison Landing Historic District, a 5.3-acre area with buildings dating to the 1850s that once housed Garrison’s post office, library, firehouse and Forson’s general store (now the art center), as well as the 1892 railway depot that is now the Philipstown Depot Theatre.

Since its founding in 1974, OSI has preserved nearly 13,000 acres in Putnam County through the purchase of property or easements, including land at Manitoga, Philipstown Town Park and Fahnestock and Hudson Highlands state parks.