The eagle has landed — and stayed to raise chicks.

The state Department of Environmental Conservation (DEC) reported on July 3 that a record number of bald eagles — at least 323 pairs — nested in New York this year. That includes two couples in the Highlands, both with at least one chick. 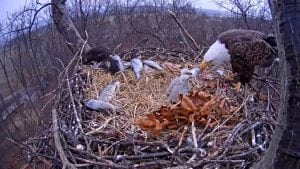 A photo taken of an eagle and nestlings from a camera installed over a nest in Pennsylvania in 2015. The pile of black fur at the left rear of the nest is probably a dead skunk.

This year, one pair nested along the river in Hudson Highlands State Park and the other near Constitution Marsh in Garrison.

Evan Thompson, assistant park manager for the New York State Office of Parks, Recreation and Historic Preservation, said the Hudson Highlands park eagles had a nest with multiple chicks. “Sightings in the area have become quite common and the eagles, though still protected, seem to be making a strong comeback,” he said.

To the south, the Constitution Marsh pair appears to have had a chick this summer, said Eric Lind, the director at the Audubon Center there.

The state’s Conservation Plan for Bald Eagles in New York State, released in March 2016, notes that the birds sometimes occupy one nest but maintain others nearby.

They mate for life, which can be more than 30 years.

They re-use their nests, adding to them yearly.

Nests can grow to be more than 6 feet wide and 8 feet deep.

An eagle’s 2-inch talons can exert 1,000 pounds of pressure per square inch.

Popular spots to see eagles along the Hudson include the North Dock of West Point (looking toward Constitution Island); the Route 6/202 overlook above Iona Island; and Riverfront Park in Peekskill.

Once common in North America, eagles began disappearing after development ruined their habitats and they were killed deliberately or destroyed through practices such as the widespread use of insecticides. (The pair spotted in 1970 produced DDT-contaminated eggs that never hatched.) By the late 20th century, few bald eagles remained in the wild in the lower 48 states.

Thanks to human intervention — positive, this time — the 1970 pair eventually managed a full nest. As part of an eagle-restoration effort, wildlife officials in 1978 recruited them as foster parents for nestlings hatched elsewhere; the pair raised eight eaglets in eight years, according to the state.

Between 1976 and 1988, the DEC released 198 eaglets, many relocated from Alaska. In 1980, two paired up and hatched offspring. The eagle recovery took off, so successfully that within 12 years the DEC stopped importing eaglets and let nature take over. The New York program became a model for 16 states and Ontario. It demonstrates “how we can get things right for wildlife and ourselves and directs us to look at other species that require conservation attention,” Lind said. 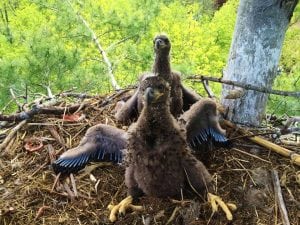 The state conservation plan notes that the Hudson Valley is one of three prime eagle habitats in the state; the birds like it both as permanent residents and as winter migrants who arrive from farther north in search of open water and fishing and hunting opportunities. (The other habitats are the Upper Delaware River and the Montezuma Wetlands Complex near Seneca Falls.)

Besides the Hudson, they also like New York City’s water reservoirs, and the conservation plan calls southeastern New York “one of the densest breeding regions” in the state. But that puts eagles close to New York City and sprawling suburbia, where power lines, wind turbines and towers bring danger, as do highways and railroads: Feeding on animals killed by cars or trains, eagles themselves become vulnerable. The conservation plan warns that “in light of planned high-speed rail expansion, railways along the Hudson River are of particular concern.”

Likewise, hanging out along some stretches of the river can expose eagles to PCBs and other pollutants, while disturbances from motorized boats can adversely affect their habitats. In addition, when eagles feed on the leftovers of game shot by hunters, they can ingest bullets and die from lead poisoning. The plan also describes the severe weather fluctuations of climate change as a growing peril.

One thought on “Eagles Get Busy”