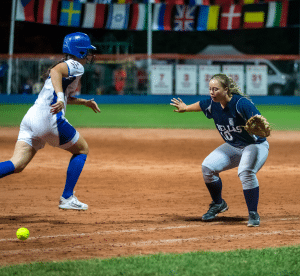 Chelsea Lisikatos (10) makes a play on a bunt down the first-base line for Greece in a 2-0 loss to Italy on June 27. (Photo by Dirk Steffen)

The Lisikatos and Montelones, profiled in the June 23 issue, faced each other on June 26, but it was not much of a game, as Greece dominated, 15-0.  Chelsea Lisikatos went 1-2 with a double and 3 RBI. 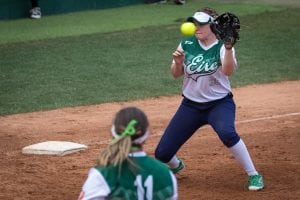 Allie Monteleone (35) snags a ball at third base during Ireland’s 10-3 loss to Germany on June 26. (Photo by Dirk Steffen)