It feels good to fix something, especially in this era of intentional obsolescence, but it was no less satisfying a century or two ago. In an exhibit called Make-Do’s: Curiously Repaired Antiques that runs through Oct. 1, Boscobel is showing off more than 250 items from its collection and that of interior designer Andrew Baseman that were broken and fixed.

As with its Hudson Hewn furniture exhibit last year, objects from Make-Do’s can be found throughout the many rooms of the Boscobel Mansion, as well as in a downstairs gallery. Look carefully at the table settings, or at the teapots on a fireplace mantel, and play a game of “I Spy” for repaired objects amidst intact kin. It’s tricky in some cases but obvious in others, such as a pewter or rattan handle on a porcelain cup. 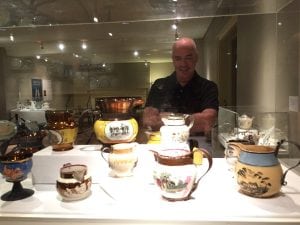 Andrew Baseman at the Boscobel exhibit (Photo by Bibiana Famolare)

According to Jennifer Carlquist, Boscobel’s curator, households at every economic level repaired items. Even in a wealthy household such as that of the family who lived in the mansion, everyone used repaired objects, whether in the formal dining room or servants’ quarters. The repairs were done by skilled tradesmen, silversmiths, tinsmiths and roving jack-of-all-trades repairmen who made house calls. 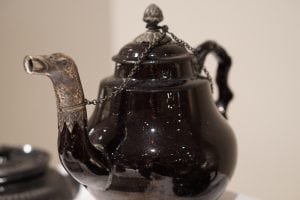 A new section of spout, fashioned as an animal, and its chain attachment, keep this teapot in use.

“Objects were saved because they were beautiful, rare and beloved,” Carlquist explains, or, with the case of   everyday items, because it was thrifty.

“I thought make-do’s connected so well to Boscobel’s own story,” she explains, because the mansion itself is a make-do. (The original Neoclassical home built between 1804 and 1808 was partially demolished in 1955, but reassembled and repurposed as a museum.) “Like Boscobel, Make-Do’s illustrates the complex relationships between everyday people and the things they choose to save,” she says.

The Art of Repair

On Friday, July 21, at 6:30 p.m., Boscobel will host a panel discussion, The Beauty of Imperfection, with collector Andrew Baseman, metalwork artist Myra Mimlitsch-Grey and Glenn Adamson, former director of the Museum of Arts and Design in New York City. They will discuss the artistic appeal of objects that are broken, scratched, lopsided or otherwise askew. Admission is $20, or free for museum members. See boscobel.org.

Carlquist contacted Baseman after reading his blog, Past Imperfect: The Art of Inventive Repair. His extensive collection has never been publicly exhibited outside of small, pop-up displays. Carlquist chose objects that mesh with Boscobel’s own collection.

“Now we can tell the story of the house on the tour, and the objects enhance the telling of it,” she says. “Plus, because of the interested response from tour participants, we’ve asked our docents to allocate a little extra time at the end of the tour for people to talk about their own treasured, repaired objects.” 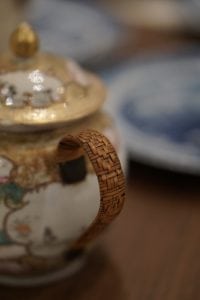 A replacement handle, made from rattan

All of this goes hand in hand with Boscobel’s efforts to personalize its collection and make the experience of visiting the mansion less formal and museum-like, she says. In a number of rooms, the ropes have been removed, allowing visitors more space to wander.

There are repaired objects everywhere, from sauceboats to curvy neo-classic chairs. A peek at the glass goblets in the dining room reveals a few with metal bases. The backs of some (broken) plates are displayed to reveal metal “staples” that hold them together. Oil lamps broke frequently. Pitchers used to tote water for bathing often had broken handles, as did chamber pots. Some were re-fired and re-glazed, but most were fixed by metalsmiths. 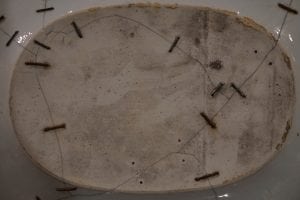 Back of a platter repaired with “staples”

“Normally museums hide the flaws, but we took care to feature them,” Carlquist notes. Even a dining table tells a story. It belonged to the Cochrane family and was possibly a gift from George Washington. “In 1864 they mounted a silver plaque on it,” she says, “but just as important are all the repairs on the back. This shows the heavy usage, love and combination of national and familial importance; it inspires us to hold onto things.”

The exhibit is open during Boscobel’s regular hours, 9:30 a.m. to 5 p.m., Wednesday to Monday, at 1601 Route 9D in Garrison. An illustrated catalog with essays by Carlquist and Baseman is available at the gift shop. Shoppers at the Cold Spring Farmers’ Market on Saturday are admitted free.

One thought on “Imperfect Beauty”