Jason Schuler, the CEO and founder of More Good in Beacon, is no soda jerk. He is, rather, a soda do-gooder.

Schuler, whose title is The Goodmaker, according to his business card, wants his business to do good by encouraging appreciation of good tea, good soft drinks and good feeling among fellow specialty food entrepreneurs. That’s why, in addition to a retail shop, More Good offers an incubator kitchen (definition: a low-cost commercial kitchen for rent by the hour or longer) to those with dreams of turning their own secret recipe into a business.

“I looked for things that weren’t there for me when I started my business and then filled those needs for others,” Schuler explains. He got his start in the off hours from a bartending gig at Gleason’s in Peekskill. The homemade syrups and bitters he used in the restaurant’s craft cocktails were a hit. When regulars began asking for bottles to give as Christmas presents, he pitched a friend and got his first investor. 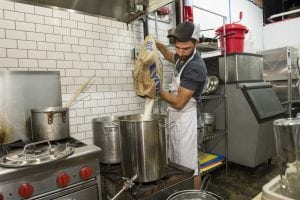 If you’re selling your creation at a farmers’ market or bake sale, you can likely set up an assembly line in your own kitchen. In New York state, however, homemade food can’t be sold via delivery, online, or at stores or restaurants. Instead, you need to use a licensed commercial kitchen.

“I wanted to make it easier for other food entrepreneurs by offering an accessible and affordable kitchen,” Schuler explains.

He also wanted to fill the knowledge gaps he identified in starting More Good, such as the need for insurance and vendors to provide labels, bottles and raw materials. “It took me three months to figure out how to get licensed as a food business,” he said. “Now I can tell others in three minutes and even give them the application.”

The More Good kitchen has several anchor clients, meaning those that rent the kitchen and handle their own production, including Go-Go Pops in Cold Spring and Mindful Kitchens, a Croton-based pop-up vegan deli that uses the facility to produce seitan, a gluten-based meat alternative. 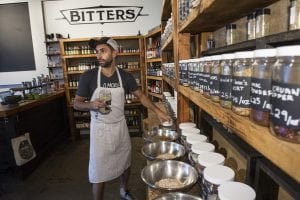 “It’s great because we’ve seen them go from developing the concept to scaling up and being on grocery chain shelves,” Schuler says of Mindful Kitchens. Blessed Brewery of Beacon is a seasonal client, making kombucha fermented tea drink. Chef Lana Schultz of Escae Cookery in Newburgh uses the kitchen for children’s cooking classes. “They learn things such as knife skills,” Schuler says, “and how to prep and cook a meal. Then they eat it.”

More Good also functions as a co-packer, or a contract manufacturer. “As you continue to grow as a food producer,” Schuler says, “it’s inevitable to go to a co-packer.” Clients include Brooklyn-based Pilot Kombucha drinks, Bad Dog Barcraft of Austin, Texas, and Shaker and Spoon Cocktail Club, a subscription cocktail mixer box. With the latter, “we get to use ingredients we don’t usually work with,” Schuler says. “Up to a few months ago, I had never worked with a kumquat; now we’re processing hundreds of pounds of them.”