Raised in Mississippi by a single mother who was an English professor, Jill Shoffiett remembers reading. Lots of reading. She stayed in her room mostly as a teenager, by her recollection, writing, drawing and reading.

Today Shoffiett tells her own stories through her paintings, a collection of which are on display through Aug. 8 at Create Community in Nelsonville. The exhibit, A Working Knowledge of the Devil: Survival Stories, takes its title from Flannery O’Connor, who once said: “A working knowledge of the devil can be very well had from resisting him.” 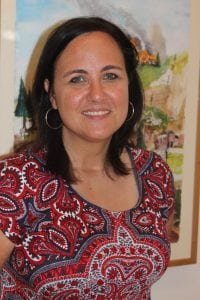 Jill Shoffiett (Photo by A. Rooney)

Shoffiett, who moved to Nelsonville from Brooklyn with husband, Michael Bernstein, a graphic artist and sculptor, says her paintings combine “pure fantasy along with some autobiography.” She explains: “For me, the intent is to suss out the meaning of identity through character, usually featuring people who dig holes around themselves.

“I tell stories based on identities, experimenting with scenarios, making up characters based on real people,” Shoffiett says. She has observed that “rooms, landscapes and the random junk people leave behind are visual tales of lives lived, struggles endured and unknowable battles being waged.” 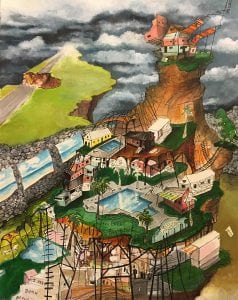 I Need a Damn Beach, by Jill Shoffiett

Although she was raised in Meridian, most of the artist’s extended family lived in Meadville, a small town in the southern part of the state, where her great-grandfather owned a farm. She attended the Mississippi University for Women (it went co-ed in 1987), where a professor urged her to apply to the Pratt Institute in Brooklyn for graduate school.

In some of her work, Shoffiett reveals her literary influences — O’Connor, Kafka — as well as memories of her best friend. “She grew up the only child of a Vietnam vet who had PTSD and was prone to strange behavior,” she explains. “Seeing the chaos of that environment started me thinking — not articulately at age 11 or 12 — that kids accept outlandish situations as routine. And that suddenly the rug can be pulled out. The strangeness of it had a real profound effect on me.” 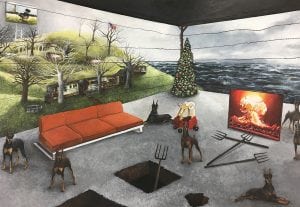 While attending Pratt, where she worked hard to drop her “fixin’s” and “y’alls,” Shoffiett found an expansive studio that allowed her to create large paintings featuring “giant, abstract insects, done in a quirky, linear style.” When she finished her MFA, Shoffiett no longer had access to the studio, so she began painting smaller works in her bedroom.

Though she had some success — her paintings were included in a show at the Brooklyn Museum, and she received mentions in The New York Times and Art in America — after close to 10 years in Brooklyn, she and her husband were priced out and moved with their young daughter to Nelsonville. Shoffiett now teaches art at a high school in Mamaroneck and paints when she can. 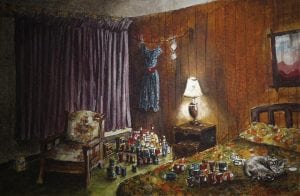 Her paintings have changed since her move to Philipstown. The oldest paintings shown at Create Community are closer to traditional (yet still skewed) landscapes, but there’s since been a shift to the combine the fantastical with the ordinary. The titles offer viewers a perch for conjecture: Last Stand for Hortence, Gonna Put in the Cabinets Soon and the epic Still Sporting Ten Kinds of Crazy, Doreen Wraps Up with an Online Shopping Spree.

Her most recent paintings feature Dobermans, a breed she grew up with and a symbol, she says, of a “visible conscience.” She sees the dogs as “sentinels, the only animate life present. But sentinels, for me, can just as easily be junked-up cars, wretched old dolls, or broken-down washing machines. 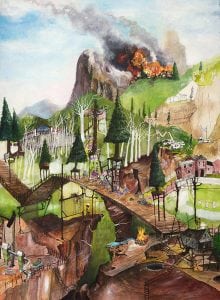 “The absent people are always making things, coping, going about their sometimes dubious affairs. The situations are not always relatable, and they’re certainly not always desirable or safe. However, humans have clearly been there, surviving in ways the onlooker may or may not understand.”