For most people, a nearly empty pantry is a problem. For Kara Marie Dean, it’s a sign of progress.

“This means it’s being used,” she explained while refilling the three shelves of a wooden cupboard outside the Beacon Recreation Center at 23 W. Center St. “That’s exactly what we want.”

There are other encouraging signs. As she stocked the pantry with canned vegetables and bags of pasta, she pointed to a package of infant formula and a box of tampons on the bottom shelf. “Those weren’t here the last time I was here,” she said. “Someone dropped those off.” 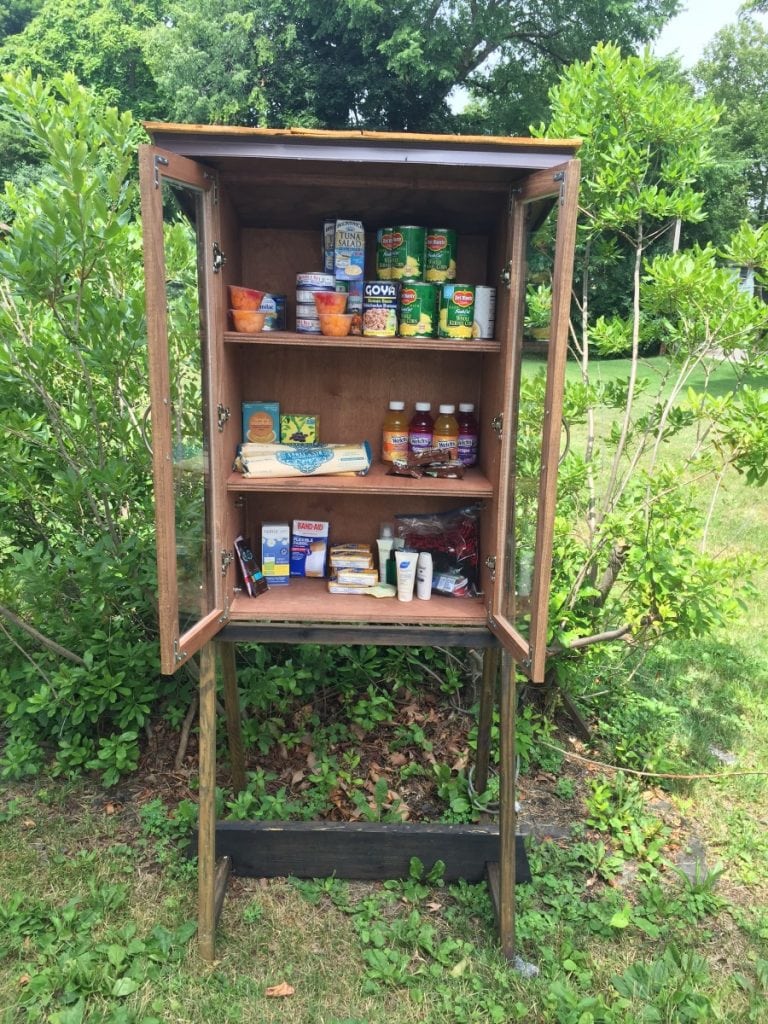 The Tiny Food Pantry outside the Beacon Recreation Center (Photo by B. Cronin)

Dean, who is a social worker at the McSilver Institute for Poverty Policy and Research at New York University, is part of a group of Beacon residents that created the Tiny Food Pantry, with plans to add more around the city. The rules are simple: Take something if you need it, leave something if you can.

“We can often do simple things to fill the gap between those who have enough food and those who don’t, and tend to a need,” said Dean. “Sometimes I get so tired of talking about things. Let’s just do something about it.”

The Tiny Food Pantry is the latest local collaboration designed to address the problem of what has become known as “food insecurity,” or not having reliable access to affordable, nutritious food.

To create the box, Dean and others at Fareground, a pop-up community kitchen that she co-founded, teamed with an architect to design it, two carpenters to build it and members of Team Kindness, another Beacon-based organization that assembles kits with toiletries, socks and other essentials for the homeless.

At Common Ground Farm, manager Sarah Simon says she is impressed by how Beacon groups have worked together to combat hunger. Half the food produced at the nine-acre farm is donated to food pantries and kitchens, which Simon said is possible thanks to the chefs, administrators and residents who purchase the other half. “When people buy from us at the market, they’re supporting those donations,” she explained.

In addition to the Beacon Farmers’ Market, which it runs, the farm sells produce at two mobile markets every Wednesday throughout the summer as part of a collaboration with Green Teens, yet another anti-hunger group. The teenagers grow and harvest produce at a community garden on Main Street on land donated by Tito Santana restaurant and sell it at a reduced cost. 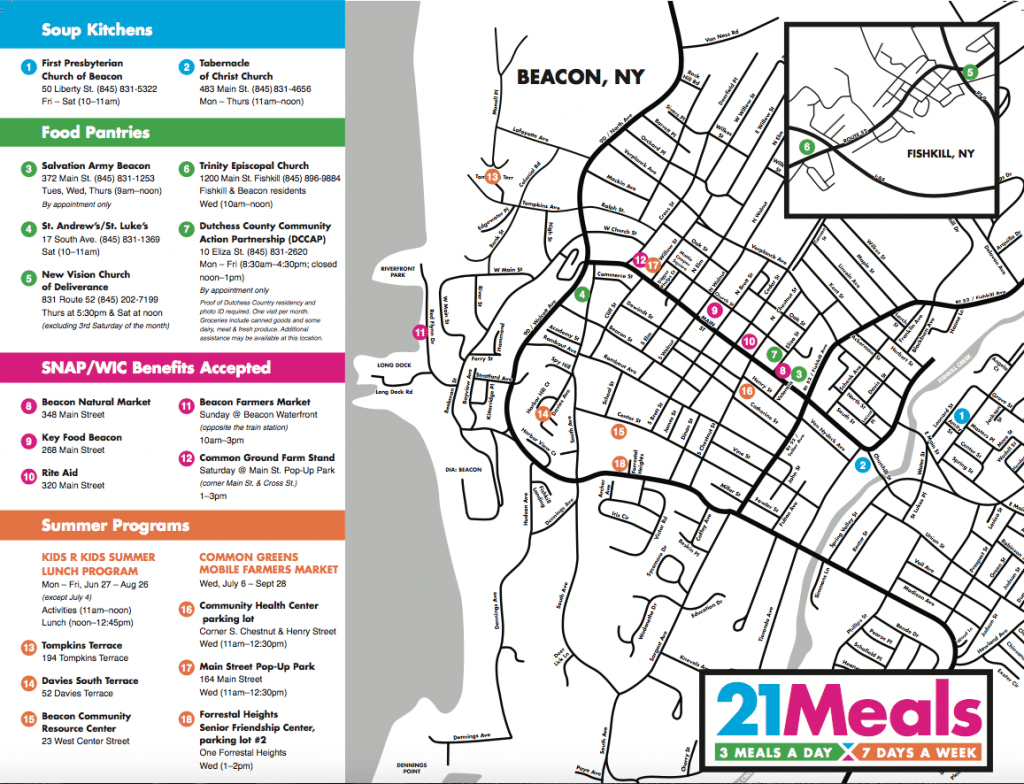 At many markets, as well as the Farmers’ Market, shoppers can use federal Supplemental Nutrition Assistance Program (SNAP) (formerly known as food stamps) and Women, Infants and Children (WIC) vouchers to buy produce. An additional program, dubbed “Greens for Greens” and paid for with the proceeds of a winter fundraiser by the Farmers’ Market, allows shoppers using vouchers from SNAP and WIC to double what they receive.

It’s a lot to keep track of, which is why Common Ground Farm, in collaboration with the Cornell Cooperative Extension Dutchess County and the Beacon Nutrition Advisory Council, created 21 Meals, a map that shows all the food pantries, kitchens and summer food programs throughout Beacon and parts of Fishkill, as well as where shoppers can use SNAP and WIC benefits (see ccedutchess.org).

“There are a lot of people in Beacon who are looking for free or low-cost meals in the area, so we thought having everything in one place would be helpful,” said Megan Murray, a nutrition educator who works at the Cornell Cooperative Extension as part of a state program called Eat Smart NY. Murray said that the map will be updated as programs change.

The Tiny Food Pantry came along too late to be included but will be on the next version. By that time, Dean said she hopes to have pantries at the Howland Library and outside Shambhala Yoga. To donate, stock the pantry with non-perishable food items or toiletries or purchase items from its Amazon wish list.