On June 17 Sister Loretta Guevarra, 92, celebrated her 75th year as a Franciscan Sister of the Atonement. Born in Los Angeles in 1924 as Leonor Guevarra, she joined the Graymoor community in Garrison in 1942 and took her final vows as a nun in 1949. 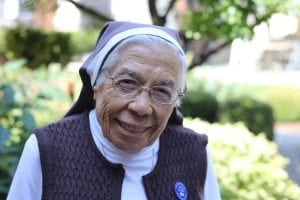 As an Atonement missionary, the sister served for 31 years in Brazil, as well as in California, Oregon, Utah and New York City. She returned to Garrison last year to reside at the St. Francis Convent, where Michael Turton met with her on July 18.

What did your parents do for a living?

My parents were Mexican. My father owned a hacienda in California. He gave young Mexican workers a patch of land and housing and in return they worked on the farm.

Did you give a lot of thought to becoming a nun or was it a spur of the moment decision?

I wanted to enter the convent when I was 12 years old, but my parents wouldn’t let me join until I was 16.

Were your friends and family surprised?

No, they weren’t surprised. I just wanted to be a sister. My whole family used to listen to the Graymoor radio programs. [The Ave Maria Hour, produced by the Franciscan Friars of Atonement, debuted in 1935 and was broadcast around the world for more than three decades.]

How did you celebrate your diamond  jubilee?

There was a Mass and a big dinner at Graymoor. I had 20 guests, many of them from California.

What has your work been as a Franciscan sister?

I went to Fordham University to study liturgy and taught kindergarten at St. Cecilia’s Mission in Spanish Harlem in New York City. I worked with the poorest of the poor in Brazil.

What project are you most proud of?

I have worked a great deal on Grassroots Ecumenism [which emphasizes collaboration between Roman Catholics, evangelicals and other denominations]. I’m very gung-ho on Christian unity. I have dedicated my life to that.

How do you think of your fellow Franciscans?

I think of them as my sisters. They are my family. We share what we have. But I’m sure at times they don’t want to hear any more about Christian unity. I talk about that a lot!

Why do you think there has been such a decline in the number of women entering the convent?

It is the way children are brought up these days. Parents are not gung-ho on Christian unity. There is divorce. Children are set aside. This has all accumulated over time. When I taught kindergarten I taught children to say their prayers so that they would grow up with that in their life. 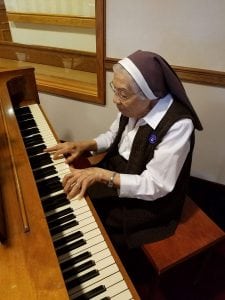 “I tickle the keys,” Sister Loretta says of her piano playing. (Photo provided)

Have there been moments when you regretted entering the convent?

I have never regretted it. Sometimes I see other sisters leave and I wonder why they came.

What has been your biggest reward as a Franciscan sister?

I am pleased to be here; it is a gift. I’m not suffering. There is joy in this. I’m following what God wants. It’s like people who get married and are happy. I’m happy.

Did you ever fall in love before entering the convent?

No, but there was a boy I liked. We’d talk or go to a movie. But it wasn’t serious. To be honest I can’t remember his name!

Have you ever wondered what you would have done had you not become a nun?

I never thought about it. I didn’t want to be a cloistered nun, though; I wanted to be a missionary.

Did you enjoy sports as a young woman?
I played baseball. I had five brothers who were all good players. Sometimes I pitched.

What do you think of Pope Francis?
He’s been wonderful. He’s gung-ho on Christian unity. He makes us see a lot of things.

Do you think women should be allowed to be priests?
It should be allowed. In Brazil I would go to a school on Sunday. I’d give communion and talk about the Gospel. I’d bring Christianity to a place.

Between 1935 and 1969, the Franciscan Friars produced more than 2,500 episodes of The Ave Maria Hour, the radio program that inspired Sister Loretta. They are preserved on vinyl records in the Archive Center at Graymoor, and in 2008 the friars began converting them to digital format. A new episode is posted each Friday at atonementfriars.org/avemaria.

What’s your favorite pizza?
I love pizza! But I can no longer eat it.

What do you do for relaxation?
I do whatever the community here plans for recreation. I love music and play the keyboard. I can’t see well enough to read music now so I make it up! I tickle the keys.

How do you like being “retired”?
I don’t know what that is, really. I’m always doing something. I’m teaching a class in scripture now on Skype.

3 thoughts on “A Habit of Goodness”